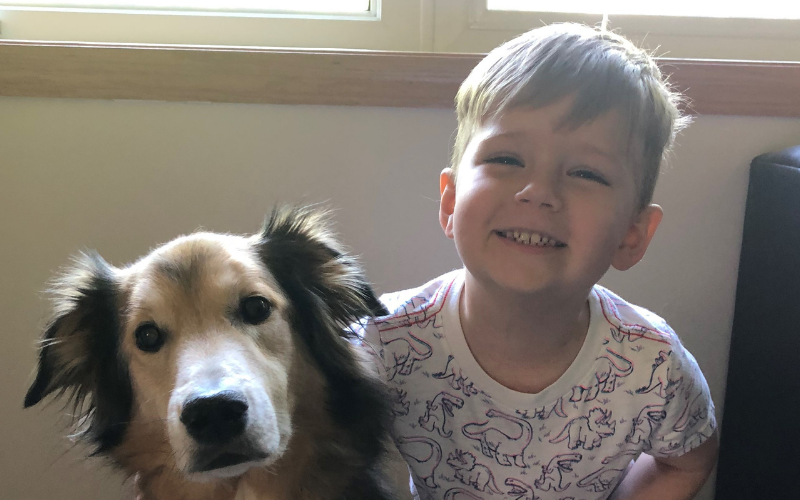 How do amazing things come to fruition?  Who are these creative people that initiate wonderous solutions? The answers aren’t as surprising as they seem when you understand the mind of a child…

I am brought back to when my son, Telly, was 4 years old. He was transitioning out of naps but still needed to rest his mind during the day, so we changed ‘nap time’ to ‘quiet time’ to appease him. Quiet time always started with a talking story, where Telly would pick a topic and plot, and then instruct me to begin creating a story.

On this specific afternoon, he requested a story about winning a fight against a monster.

I immediately thought about how he had already conquered the biggest monster in this world, twice – how he is already everything he wants to be in his story: brave, strong, smart, relentless.

Telly was diagnosed with acute myeloid leukemia (AML) in his bone marrow on October 9, 2015, when he was just 16 months old. He went into remission after the first round of chemotherapy and completed the remaining three rounds successfully. Then, after almost 11 months of living in remission, Telly relapsed with the same subtype of AML, but this time the cancer relapsed in his bone marrow, his central nervous system and his brain. He spent 118 consecutive days in the hospital, with 100 of those days in confinement. He spent 50 days in the ICU; 46 of those days being intubated and sedated.

On that day, I instead told him a kid-friendly story about fighting a monster; a monster with one eye and six arms; a monster that is green and orange; a monster that he fought off with a sword while yelling, “Hiyah!”

In each story, both real life and his version, he wins.

You see, nothing is impossible when looking through a child’s eyes. Whether it is some make-believe battle, or a very real-life battle, children find ways to conquer anything in their path. Childhood cancers are one of the biggest battles that kids can face, and it should come as no surprise that children are the ones innovating ways to fight back.

I am always so inspired by the story of Alex’s Lemonade Stand Foundation founder Alex Scott. She was 4 years old when she raised $2,000 to help kids fight cancer, and her weapon of choice was a lemonade stand. A lemonade stand and a little girl determined to fight made a huge impact. Before Alex passed away, at the age of 8, she created a lemonade-shielding army and was able to raise more than $1 million dollars to help find cures for childhood cancers.

Come fight with us, one cup at a time.

Register Now for Lemonade Days
June 5 – 13, 2021
Sweet news: Lemonade Days is returning to June! Every year, supporters from all over set up stands and events to raise money and awareness for pediatric cancer research. Register your lemonade stand today and make every cup count toward cures.

END_OF_DOCUMENT_TOKEN_TO_BE_REPLACED

Daniel, nicknamed DJ by his family, loves video games, cooking and playing soccer. In summer 2019, DJ had headaches and nausea often. One early morning, his parents found bruises on his leg and back. He was brought to the hospital and diagnosed with ALL.
Read more »