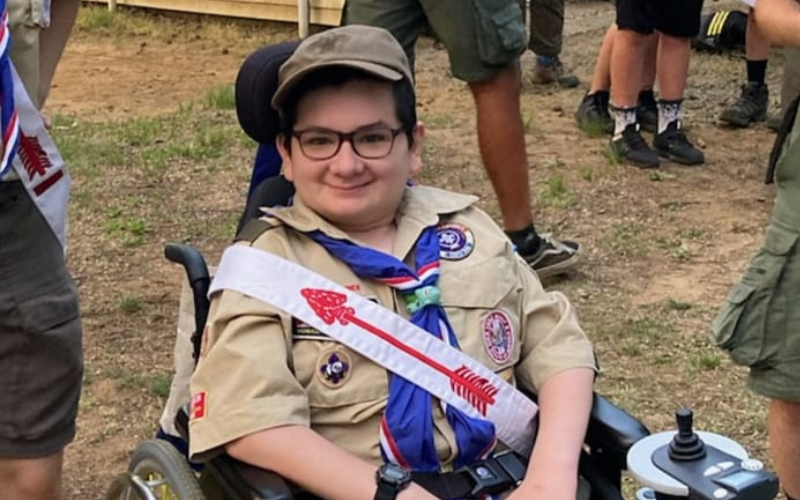 The first time, Tony was just 2 years old and was diagnosed with stage IV high-risk neuroblastoma.

His treatment was intense: biopsies, stem cell extraction, six rounds of inpatient chemotherapy, radiation, and two stem cell transplants. Tony finished treatment and moved onto the follow-up regiment that many childhood cancer survivors endure: regular scans, blood work, EEG’s and EKG’s to monitor his heart function, endocrinology to watch his growth, nephrology to watch his kidneys and neuropsychology testing to follow up on his brain and cognitive function.

Tony’s doctors have a joke — in a not so funny way — that if there is a treatment side effect to be had, Tony got it. He developed cataracts in both eyes, high frequency hearing loss, growth hormone deficiency, orthopedic issues, thyroid dysfunction, immune dysfunction and chronic high blood pressure.

As if those issues were not enough, then Tony went into kidney failure at just 13 years old. His father, “Big Tony,” became his kidney donor.

“I came home and thought I could put things behind me, boy was I wrong,” said Tony.

The second time Tony battled cancer, he developed a rare transplant side effect called post-transplant lymphoproliferative disorder, a type of lymphoma. He had to endure six more rounds of chemotherapy and then even more intense treatment side effects which left Tony in the hospital for eight months battling sepsis. After discharge, Tony was diagnosed with cancer for a third time—this time skin cancer on his back, most likely a side effect of radiation.

Today, Tony continues to fight to recover from cancer and the plethora of side effects that have changed his life completely.

Childhood cancer not only kills; it steals millions of years of healthy life away from the children who are fighting the disease.

While Tony’s story may sound like one in a million, the reality is that childhood cancer survivors are twice as likely to suffer from chronic health conditions versus their peers without cancer.

According to a study supported by the U.S. Social Security Administration, there are an estimated 500,000 survivors of childhood cancer in the United States. The same study found that during the fiscal year 2019, disability benefits were granted to 2,725 children for cancer claims.

Treatment, long-term side effects and the disease itself severely impact their quality of life.

These side effects can include cardiac dysfunctional, hearing loss, fine and gross motor dysfunction, infertility, secondary cancers, depression, anxiety and other physical and psychological issues.

Childhood cancer research is not simply focused on finding cures for children; it is also working to find safer treatments that minimize or eliminate potentially devastating short and long-term side effects.

For children like Tony who were diagnosed with childhood cancer so early in life, treatment can bring even more intense side effects.

“When you think about the kids who are diagnosed with childhood cancer, some of these children are young — they are babies. They have to get treatments like radiation and the effects of that can be just devastating. Our goal is to completely change that fate for these kids,” said Dr. Yael Mosse, an Alex’s Lemonade Stand Foundation (ALSF) funded researcher. Dr. Mosse is part of the ALSF Crazy 8 Initiative, the single, largest funding commitment from ALSF to date.

ALSF committed $18.5 million to the Crazy 8 Initiative in May 2021 to four game-changing, collaborative projects at 15 institutions in the United States and Europe.  These projects are taking on the most deadly childhood cancers with one singular focus: curing the incurable.

In addition to the Crazy 8 Initiative, ALSF has funded more than 1,000 Grants at nearly 150 Institutions, with one singular focus: safer treatments and cures for all children affected by cancer.

National Cancer’s Survivor’s Day is Sunday June 6. At Alex’s Lemonade Stand Foundation our goal is more cures and safer treatments for children. This year Survivor’s Day coincides with the first weekend in Lemonade Days—our annual, week-long national lemonade stand event. During this week, supporters everywhere host lemonade stands, just like Alex did for the first time 21 years ago. Their support is what continues to drive all of us to our goal: cures and safer treatments for all children.

It is never too late to host a Lemonade Stand, register today! Or check out our Lemonade Stand finder. Simply enter your zip code and find a list of nearby stands that you can support.

Together, we will find cures for all children.

END_OF_DOCUMENT_TOKEN_TO_BE_REPLACED

Makenzie is a bright 8-year-old fashionista who loves dancing and music. When she was 20 months old she received a bone marrow transplant to treat her severe combined immunodeficiency. A year later, she found out the donor had been diagnosed with cancer.
Read more »