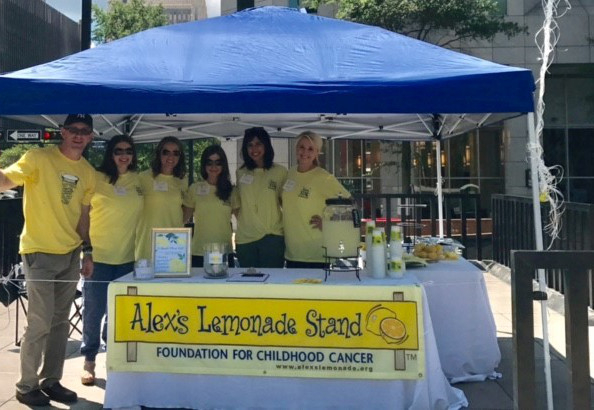 When Terry watched the Kentucky Derby in 2004, he was captivated by the story of Alex Scott and her connection to the racehorse Afleet Alex. The horse’s owners wanted to give back and decided to support Alex’s cause of fighting childhood cancer.

A horse racing enthusiast, Terry never forgot watching Afleet Alex nearly win the Triple Crown (the Preakness Stakes, Belmont Stakes and Kentucky Derby). The story stuck with him until 2017 when he and some colleagues at his law firm – Lightfoot, Franklin, & White – held their first annual lemonade stand.

Each year, they gather in the business district of downtown Birmingham and sell lemonade. Thanks to social media posts, most of their donations are collected online. They also reach out to family and friends prior to setting up the stand.

Their goal is to reach a cumulative amount of $100,000 over four collective years of stands. They hope this year will be extra memorable by raising $28,000 to finally hit that mark. To this day, Terry finds Alex’s story endlessly inspiring and he is proud to be a part of continuing her legacy of cures.

“Try to secure donations early through social media posts and personal contact with family and friends.”

Hold Your Own Event