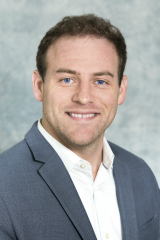 This project originated at the University of California San Francisco. Effective July 2017, Dr. Walsh has accepted a new position and will be completing work on his 'A' Award at Duke University in Durham, NC.

Dr. Kyle Walsh, of Duke University, had a theory that the genes that determine height might have something to do with the development of osteosarcoma, the most common type of childhood bone cancer. Osteosarcoma is more common in boys and typically arises during adolescence, when children are experiencing growth spurts.

To test his theory, Dr. Walsh used his ALSF ‘A’ Award to gain access to California’s infant blood spot repository. This repository houses thousands and thousands of blood specimens taken at birth, when a newborn would most likely be cancer-free. Then, using data from the California Cancer Registry, Dr. Walsh studied only the blood spots from children who were later diagnosed with osteosarcoma. His team looked specifically at the 423 genes known to influence height.

His finding: children that developed osteosarcoma had a genetic propensity to become taller adults.*

Although height genetics are unable to be changed, this finding may shed some light on the genetic and biological factors that drive both height and osteosarcoma. Ultimately, this finding could guide future research efforts to identify specific genetic targets for prevention or treatment of osteosarcoma.

Dr. Walsh plans to investigate how environmental exposures and dietary factors might interact with established osteosarcoma risk factors, like height, to modify cancer risk in children. This could help scientists to identify potential targets for invention strategies, with the ultimate goal being the prevention of osteosarcoma.

Dr. Walsh’s research was published in Cancer, the journal of American Cancer Society in October 2018.

*Note: this finding does not indicate that tall individuals are more likely to develop osteosarcoma.

Featured Project (as seen in the October 2015 ALSF E-News): 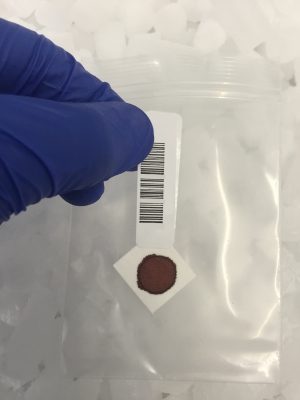 To perform the study, he is accessing dried newborn bloodspots (pictured) stored by the California Department of Public Health for 675 children who were diagnosed with osteosarcoma. He also has a control group of children with some of the same characteristics, who weren't diagnosed with osteosarcoma. His research is examining the genetic differences between the two groups, drawing on an analysis of the bloodspots and birth certificate data.

By examining the relationship between the genetic variants and childhood growth, he has found evidence that increased birthweight is associated with tumor extension, higher tumor stage, and metastatic disease. He continues to incorporate genetic data into his study to gain more specific understanding of osteosarcoma, the third most common cancer in adolescents.

By leveraging a large multi-ethnic patient population drawn from the California Birth Cohort, we will compare the genomes of 545 children with osteosarcoma to the genomes of 3545 cancer-free individuals to identify genetic risk factors underlying this disease. Because this study utilizes biologic specimens collected at birth, years prior to diagnosis, its powerful design enables identification of potential biomarkers of future osteosarcoma risk. In addition to studying the heritable causes of osteosarcoma, we also seek to identify genetic variants that are associated with poor prognostic factors, such as larger tumor size and presence of distant metastases. An enhanced understanding of the factors underlying pediatric osteosarcoma risk, including how genetic variation interacts with childhood growth trajectories and clinical prognosis, could help detect susceptible populations and identify children with potentially aggressive tumor behavior. By conducting a truly multi-ethnic study, conducted within the diverse population of children born in California since 1989, we will extend pediatric osteosarcoma research to include populations frequently omitted from cancer studies. We expect discoveries from our proposed investigation to profoundly change osteosarcoma research paradigms and to usher in a new generation of genomic studies that can improve outcomes for children affected by this devastating disease.

A total of 670 children born in the state of California between 1978 and 2005 have been diagnosed with osteosarcoma, a malignant and aggressive bone cancer. We have obtained blood samples, collected at birth, from 540 of the children who went on to develop this disease. We have extracted DNA from these blood specimens and are performing genetic analyses to identify inherited genetic variants that increase risk of osteosarcoma. Because patients with osteosarcoma are often unusually tall for their age, we also investigated whether measures of childhood growth impact osteosarcoma development, including telomere length.

Telomeres are repetitive DNA sequences that cap and protect chromosomes, but these repeats are lost when cells divide. Telomere shortening helps to prevent cancer by limiting the number of times that a cell can divide before dying. Telomere length at birth may be a potential biomarker of future osteosarcoma risk. Our analyses indicate that children who are genetically predisposed to have longer telomeres are at increased risk of developing osteosarcoma. We hypothesize that long telomeres may increase risk of osteosarcoma by allowing a cell to undergo more divisions and, therefore, to have more chances to accumulate mutations before dying.

We have additionally observed that higher birthweight is associated with more aggressive osteosarcoma. Each 200 gram increase in a child's birthweight was associated with an 11% increase in risk of an osteosarcoma patient developing metastatic disease. Birthweight was also associated with tumor location, with smaller babies being likelier to have osteosarcomas in their arms and legs, as opposed to their ribs, pelvis, sternum, or jaw. We believe that children who are born small may experience rapid "catch-up" growth during childhood, increasing their risk of developing tumors in the long bones of their arms and legs. Although our large-scale genomic analyses are continuing, results thus far support the idea that telomere length, birthweight, and potentially additional measures of childhood growth are associated with osteosarcoma development and clinical presentation.