The Impact of Hypoxia on Epigenetic Changes in Neuroblastoma 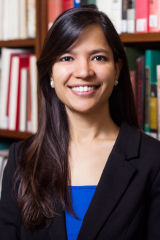 Neuroblastoma (NB) is a childhood tumor that typically arises in children under 5-years-old. Despite the use of aggressive therapy for patients with high-risk disease, their long-term survival rate is only 40-50%.  In order to identify pathways leading to aggressive NBs, our group has examined how a low oxygen environment contributes to tumor resistance and aggressive growth.  Our group has shown that oxygen availability affects modifications to the DNA that regulate its organization and consequently tumor behavior. I hypothesize that high-risk features like MYCN overexpression regulate DNA modifications in NBs, an effect that is further enhanced by low oxygen environments, resulting in more aggressive NBs.

At a molecular level, my planned experiments will explore the pathways in high-risk NB cells that regulate the TET1 gene, which controls tumor DNA modifications. My research will look at how activation of TET1 can initiate modification of DNA in certain genes associated with a poor survival rate in patients by making them more responsive to a low-oxygen environment. This work has the potential to identify specific DNA modifications that can serve as novel biomarkers for aggressive disease and to develop new approaches to risk-stratify these tumors and to target therapy.