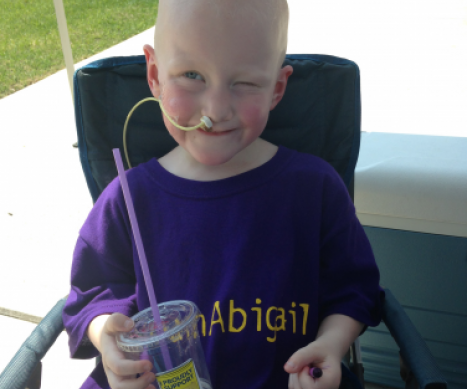 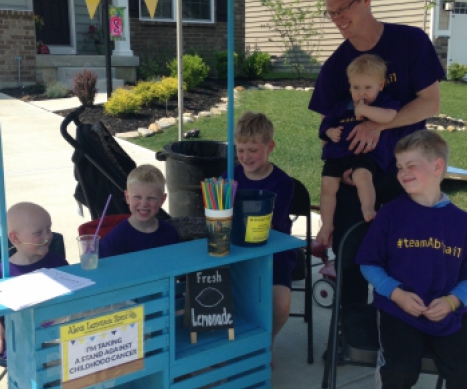 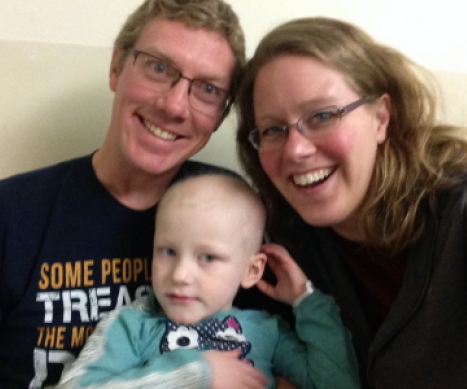 Abigail loves to play with her four brothers, read and ride her tricycle. She has become a huge fan of the movie Frozen and insists on watching it during every treatment and hospitalization. Abigail also has an infectious smile and irresistible laugh.

Her fight first started after she began experiencing some unexplained bleeding. That prompted a trip to the doctor where she was initially diagnosed with an infection. When symptoms persisted after starting antibiotics, it was determined that she needed an ultrasound. During this test, the doctor discovered a 4x2 cm mass in her bladder and she was later diagnosed with embryonal rhabdomyosarcoma.

Abigail’s chemotherapy schedule will be 43 weeks long if she responds positively to treatment. She also receives 20 consecutive radiation treatments concurrently with the chemo as well as a series of biopsies and a surgery to remove a portion of the tissue around the mass.

Her family’s hope is that Abigail will continue to live a full, active life and she can share the hope that she has with others. Her parents say that there are many dark and uncertain days in the early stages of a cancer diagnosis. But, no matter what trials are ahead, there is hope and a light in the dark places. They say that for any family that’s also going through treatment, it’s important to remember that.

Abigail is a superhero to her family because she lives in the moment. She doesn't fear the future; she simply enjoys each moment for what it is.

Alex's Lemonade Stand Foundation (ALSF) has been a tremendous encouragement to Abigail’s whole family through the SuperSibs program. Abigail's three older brothers are involved in the SuperSibs program. They are so excited to receive their own packages in the mail on a regular basis. Often the focus tends to center around the child in the family with cancer. SuperSibs has allowed Abigail’s brothers to feel they have a special place within the family.

They also love that ALSF is providing funds to help with pediatric cancer research to improve treatments and survival rates for kids all over the world. To support this, the family hosted their first ever lemonade stand this summer. They couldn’t believe all of the amazing community support. They quickly exceeded their initial goal of $100 with a grand total of $506.50!

Donate in Honor of Abigail Today!