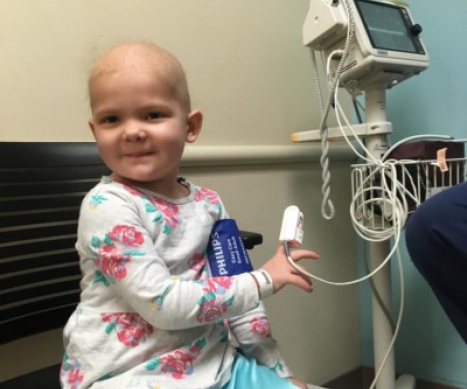 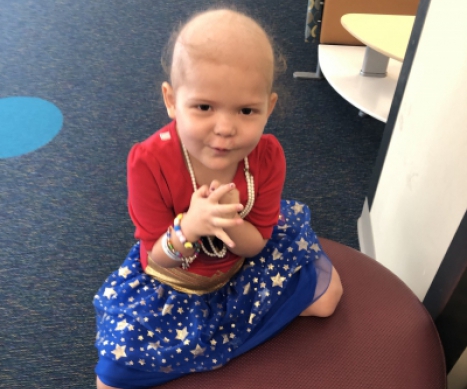 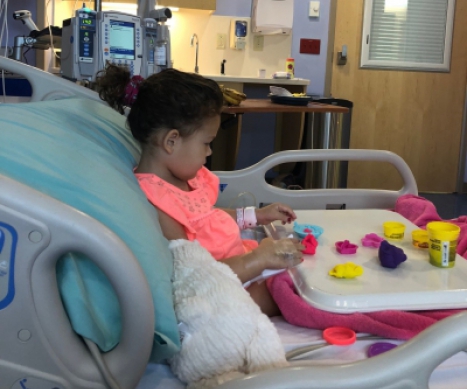 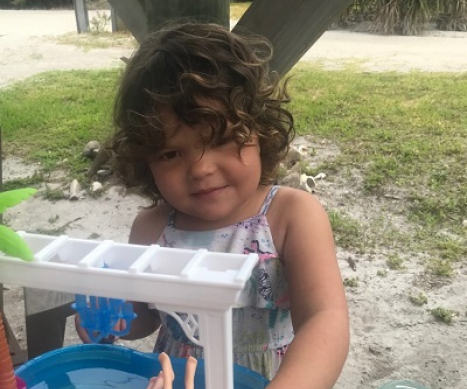 Alison loves her dog, Brooks, and LOVES princesses – she owns almost every Disney princess dress there is. When she got to spend a week in Disney, she even had tea with the princesses in person. She also has a motor that doesn’t stop. Alison is always running.

So it was concerning to her father, Jason, when she didn’t immediately run into his arms like she normally did when he picked her up after work. A few days went by, and the usually high energy Alison couldn’t even gather the strength to get out of bed. Her parents thought it might be an iron deficiency, but nothing changed after giving her iron drops. Her pediatrician recommended she get a blood test. The following Tuesday morning, in the All Children’s Hospital (ACH) emergency room, Alison was diagnosed with acute lymphoblastic leukemia (ALL) at 3 years old.

Her red blood cell count was so low at the time, Alison was rushed to Sarasota Memorial Hospital in an ambulance so she could be given a blood transfusion on the way. Then she and her family returned to ACH where she stayed for two weeks and underwent surgery for a bone marrow and lumbar spinal fluid test. This was followed by chemotherapy, which she received weekly for the next nine months.

For someone as outgoing as Alison, keeping her at home has been the hardest part. In March, she could see the Ferris wheel for the local fair go up outside her window, but, being susceptible to disease, was told she couldn’t go. Daycare wasn’t an option either. Luckily, though, she’s been able to spend a lot of time with both sets of grandparents and close family friends.

Because of Alison’s inspiring strength, her grandfather has taken to calling her a warrior princess—a title meaningful to her family’s rich Serbian history.

While Alison was progressing well with her treatment, her family hoped they could lower her chemo dosage. But doctors advised it was too risky. Then the discovery of a new study, called AALL0932, gave them hope. Alison qualified as a candidate for a protocol that will cut back on the chemo she was taking. She will be the first to test this new treatment which will only require her to return to ACH every 12 weeks. Her family is looking forward to October 5, 2020, the day this treatment is over.

As she bravely battles her cancer with the strength of a warrior princess, Alison is the face of fundraising efforts being made by employees at Jason’s company, S-One. They held a successful auction through April and May raising $3,900 for pediatric cancer research, a lemonade stand in front of their corporate building in downtown Sarasota on June 20th, and a 3K walk for employees and their families in September, Childhood Cancer Awareness Month.

Today, Alison is doing well in treatment and has even grown her curly hair back out!

Alison’s family thinks Alex’s Lemonade Stand Foundation is important because of the tremendous financial support it provides for families experiencing childhood cancer. They appreciate the significance of the mission to raise funds and awareness one cup at a time.

“Even with the best insurance possible, I still have to pay out of pocket for Alison’s monthly medication,” said Jason, “There’s just so many more little payments outside of your normal healthcare that people don’t even realize…. every little bit really helps no matter how big or small it is.”

Donate in Honor of Alison Today!