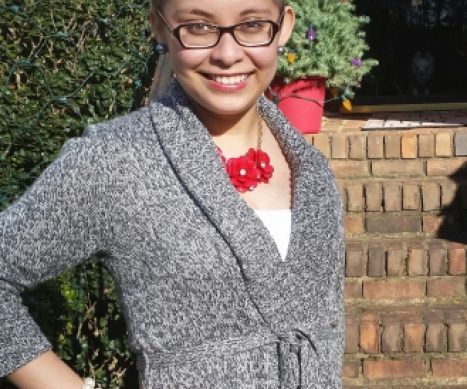 Ana Rodriguez is a quiet and loving 18 year old with a genuine compassion for others, and a surprisingly fun silly side. She attends Savannah College of Art and Design (SCAD) and majors in fashion marketing and management. Ana loves designing dresses, going shopping with friends and family, and taking photos, but she’s also a two time cancer survivor.

While in eighth grade, Ana was diagnosed with ovarian cancer and underwent surgery to remove a 10 pound tumor. During the operation, the surgeon not only removed the tumor, but also one of her ovaries that was deemed cancerous.

After four cancer free years, Ana was diagnosed with colon cancer in July 2014. Preparing to enter her first year at SCAD, she was heartbroken to have to delay school to undergo surgery as well as endure three rounds of chemotherapy.

Ana is working hard to catch up in school and dreams of one day becoming a successful fashion buyer. She wants others facing a cancer diagnosis to know that anything is possible and to never give up and continue to live your life. She calls herself a hero, “because I showed cancer that it cannot control me and that it chose the wrong person to mess with.”

Quote from hero: "Cancer doesn't control my happiness, I do."

Donate in Honor of Ana Today!