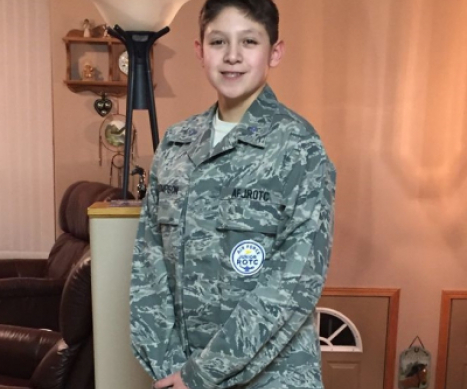 Anthony is a soft-spoken 16-year-old who enjoys the great outdoors. Whether he is hunting or fishing, Anthony is at peace in nature. Anthony loves to help others and has been prepping his lemonade stand months in advance to make sure he is ready to raise money for kids with cancer, just like him.

One day when Anthony came home from school, he noticed a peculiar spot on his eye. He immediately went to the doctor to have it checked out but was quickly sent off to receive an MRI. It was then that a large mass in his brain was revealed. He was diagnosed with craniopharyngioma.

He was instantly admitted to the hospital, and five days later underwent the first of two surgeries to remove as much of the tumor as possible. He began proton radiation therapy at the Mayo Clinic to take care of the remaining tumor. After six more weeks of radiation, he will have to wait three-to-six months to know if the treatment was effective.

Radiation hasn’t been easy for Anthony, and he has often been left wondering, “Why me?” When he realized just how many other young people are affected by cancer and receiving treatments just like him, Anthony’s resilient spirit gave him the reassurance and determination he needed to continue fighting. He planned on one day joining the military, but since that may no longer be an option for him, Anthony’s mom believes he will still find a career he is passionate about in the future. Her only dream for her son is to see him grow old.

Anthony’s treatment requires him to travel often, leaving for Sanford Medical Center on Mondays and returning on Fridays for the six-week treatment period. The COVID-19 pandemic has made travel harder, forcing Anthony to wait to see some of his doctors. They have had to take several precautions very seriously, like wearing masks everywhere they go, constant hand washing/sanitizing and packing their own food to avoid the risks of eating out.

Through it all, Anthony’s family has seen Alex’s Lemonade Stand Foundation (ALSF) as a huge help. When Anthony first began treatment, they didn’t have anything set up with the insurance company, but ALSF was able to relieve some of that stress by paying for their hotel room. They are very appreciative of all the work ALSF has done to help them and other families in need.