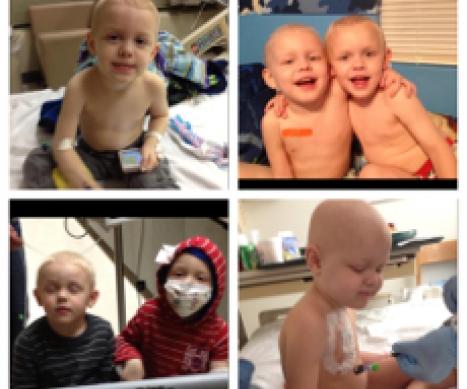 Ben and his identical twin Joseph are a rambunctious and fun 5-year-old duo. Like many little boys, Ben loves dogs, being outside in nature, riding four wheelers and playing in the dirt and mud. He and his twin, along with little sister Lyndsey, keep their mom constantly on her toes.

Ben was a very active 3-year-old. One day Ben and his brother were playing on a crib mattress when Ben fell down and broke his collar bone. From that point on, his health went downhill. He got pneumonia, unexplained fevers and complained of leg pain, to the point where he couldn’t walk. His mom knew something wasn't right with her spunky 3-year-old and took him to his pediatrician on a cold snowy day. The night before the appointment, Ben looked as pale as paste.

Ben’s pediatrician referred him to a hematologist. That doctor called the next day to tell Ben’s mom to take him to the hospital. Just before they left, Ben’s mom said to her mother-in-law that Ben reminded her of “a leukemia baby,” words that would haunt her later.

Ben was diagnosed with acute lymphoblastic leukemia. He began treatment, which involved numerous chemotherapies, including intrathecal chemo (into his spine), and chemo pills at home. He will go to the clinic every 3 months for the next 2 ½ years for chemo and takes a lot of pills at home.

“As of right now chemo is the closest thing to a cure they have,” his mom says, “But it's so hard on his little body. I'm terrified of the long term effects and feel like all I do is feed him meds.” Ben’s family also has to be very cautious of fevers and infection since he has a port.

Ben is in remission and will be in maintenance for 2 ½ more years. His family’s lives will never be the same, but they are taking it one day at a time, being strong, holding onto their faith, and hoping and praying for a cure.

Donate in Honor of Benjamin Today!