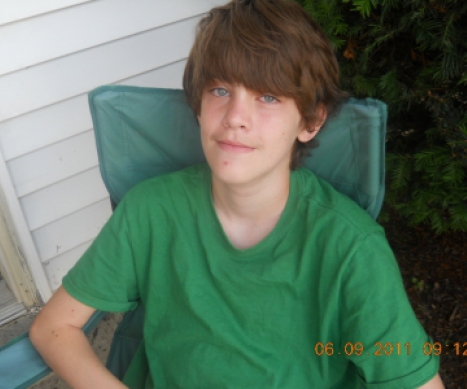 Chris had beautiful smiling eyes, loved to make people laugh, and loved video games, the OSU Buckeyes, and his brothers and sister. When his cancer became so advanced that he could no longer run, he still enjoyed going to his siblings’ cross country and track meets to see them run and cheer them on.  He was so proud of their running abilities.

Early one morning when Chris was 14, his younger brother came running in to his mother’s room to tell her Chris was acting weird. Chris was having a seizure. At Nationwide Children’s Hospital in Columbus, Ohio, doctors identified small, round blue cell tumors on Chris’ brain and diagnosed him with spinal/central primitive neuroectodermal tumors. An MRI showed that Chris had tumors compressing his spine in several places to the point where doctors were surprised he could even walk.

Chris’s treatment began with chemo but his body responded poorly and he had to be placed on a vent in the PICU for three days. After that, he had a VP shunt, 30 rounds of radiation, four months of chemo and four autologous stem cell transplants.

Chris’ mother wrote, “Being a mother to a child who had cancer is hard because you can't fix things. You can't make your child better. You have to put your trust in others that they can make it all better. Unfortunately, sometimes things just can't be fixed.”

His mother hopes that is he is finally free of pain and at peace. In a characteristic act of generosity, Chris donated his body to science in the hope that it would make a difference in the fight for a cure.

Chris is the hero of his friends, family and classmates for his heart of gold, his courage in the face of cancer, his strength through all the pain, and his ability to take all of the treatments, procedures and struggles in stride.


Hero Quote:
After the first meeting with his massage therapist, Chris told her "When you feel better, you heal better." That is what the sign she puts on a patient's door during her session now says.

Donate in Honor of Christopher Today!