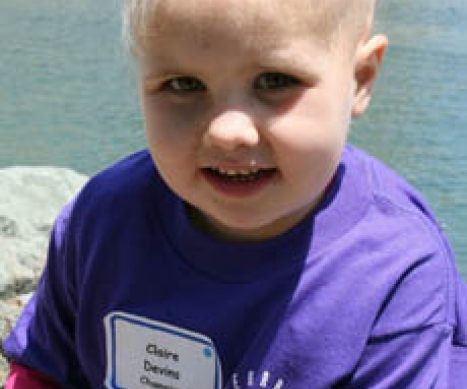 Claire was just 3 weeks shy of her 2nd birthday when we heard the words that no parent is ever prepared for..."your daughter has a brain tumor." The doctors were certain that it was malignant and that Claire needed surgery quickly. After removing a tumor the size of an orange, Claire was diagnosed with a very aggressive and rare brain tumor called Atypical teratoid rhabdoid tumor (AT/RT). Considering her age, we were told she had only a 10% chance of surviving this cancer. Devastated, but hopeful, we took our family of 7 from our home in Southern California to Memphis, Tennessee so Claire could receive treatment at St. Jude Children's Research Hospital. It seemed the most hopeful option. Six months later we took Claire home cancer free.

As this particular cancer does, after just 6 months at home, an MRI revealed 3 new tumors in Claire's brain. Although there were treatment options we were told that Claire had no chance of surviving this time. We were told that no child has been known to survive recurrent AT/RT. My response to that was, "she could be the first."

After more treatment Claire remained in remission for 9 months. In January of 2010 another new tumor was discovered in Claire's brain. Discouraged but not beaten Claire had 2 more surgeries, chemotherapy and radiation. She's currently still in treatment.

We take our cues from Claire as to how much is too much. Some doctors have told us that we've done enough but they don't know Claire like we do. They don't see her swinging on a swing laughing and singing. They don't watch her play endlessly with her siblings, they don't hear her talk about what she wants to be when she grows up, and they don't see her loving life each day. Mostly, we rely on our faith to lead us down the right path as we make these heavy decisions for Claire. We pray that we're doing the best for her and most of all we pray for a miracle that will keep Claire with us for many, many years to come.

Donate in Honor of Claire Today!