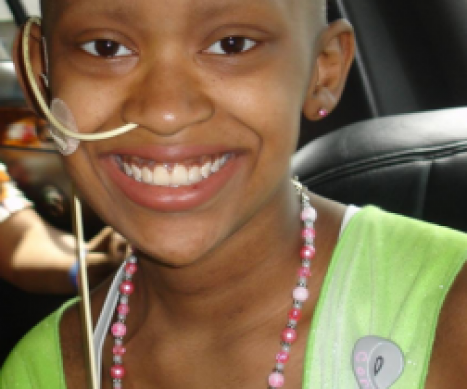 Cora was truly a little princess: she loved wearing pretty dresses and decorative shoes, and loved painting her nails! She even taught herself to apply false nails and apply exciting nail decorations. Cora also loved to ride bikes, jump rope, play with her friends in the neighborhood and play with her cousins.

In August 2012, Cora and her family were visiting Goodwater, Alabama. She suddenly became ill and was not able to respond clearly when asked questions. Her father rushed her to the emergency room, and during the ride she suffered a seizure in the car. She was transferred to Birmingham Children’s Hospital, where she was observed and underwent tests. An MRI eventually revealed a growth in her brain and she was scheduled for surgery in October 2012. A biopsy revealed that Cora had brain cancer, specifically a primitive neuroectodermal tumor (PNET).

Cora had 30 radiation treatments and six months of chemotherapy and an MRI every two months to assess her progress. At the end of her treatment, scans showed no tumor. However, two months later, Cora’s tumor had returned. She went through several more months of treatment and medications, but her tumor was very resistant to all treatment. Heartbreakingly, the physician placed her on hospice in June 2014, and she passed on August 12, 2014.

Cora’s mother writes, “Even though Cora is no longer with us, our hopes and dreams are to keep her memory alive in any way we can, especially by sharing her story with others. Even though she lost the battle, her life was an example of courage to all she met.”

Cora was truly a hero. Even with the limitations of her disease and treatment, eventually including a feeding tube and wheelchair, she was always smiling and truly warmed the hearts of others. Cora lived every day to the fullest, even in the face of her hardships. Cora particularly enjoyed participating in children’s activities at church, including Vacation Bible School.

During their journey, Cora’s family relied on one another to stay strong. Cora’s family promised to have no regrets throughout their last days all together and tried to help others whenever possible. Cora’s family plans to hold an Alex’s Lemonade Stand fundraiser soon and wants to become more involved in childhood cancer advocacy.

Donate in Honor of Cora Today!