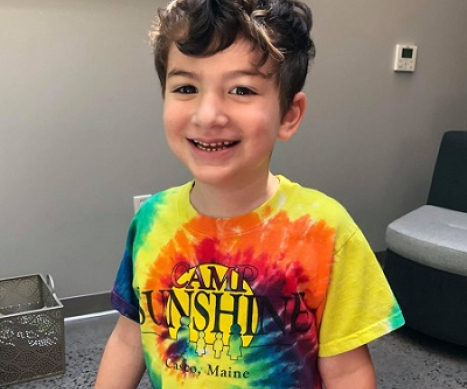 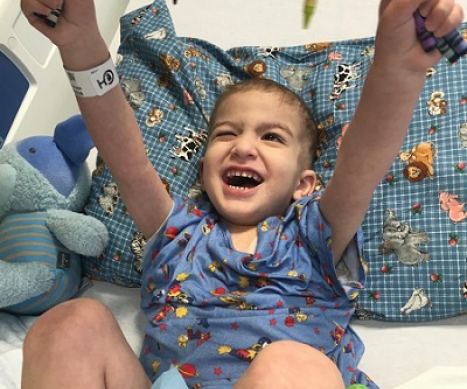 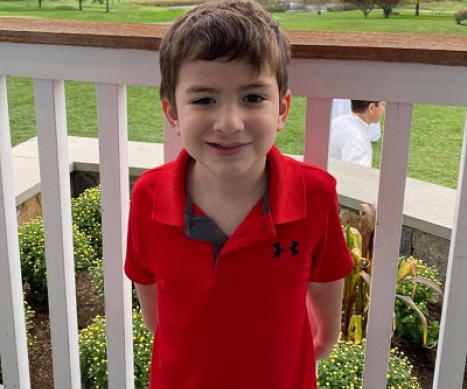 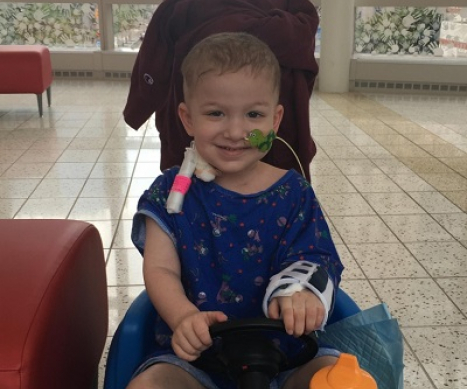 March 2016 began a tough year for Daniel. Diagnosed with medulloblastoma, the disease put a major stopper on his normal, 3-year-old life.

His parents were advised that part of the treatment plan for Daniel’s cancer would consist of full brain radiation which would likely cause significant impact on his cognition. To minimize radiation exposure, Daniel’s family travelled to Children’s Hospital of Philadelphia 100 miles from their home to pursue a high-dose chemotherapy and stem cell transplant regimen. This required 150 inpatient nights spent in hospitals over eight months.

But Daniel powered through even more than that – he also underwent brain surgery to remove as much of his tumor as possible. It was successful, but the tumor had been pressing against his skull for so long that the bone became too thin and was deemed irreplaceable. Following that, Daniel had a ventriculoperitoneal shunt put in, 18 brain and spine MRIs under general anesthesia, two lumbar punctures, a stem cell harvest and three stem cell transplants, eight more surgeries, and too many platelet and red blood cell transfusions to count. His parents also decided to add proton radiation sessions to his treatment plan to increase his odds of survival. With no long-term studies into how this would impact such a young age group, it was a difficult choice for them.

By this time, Daniel had not been able to attend school for 13 months. He’d lost the protection from all his previous vaccinations, and it took more than two years for him to completely catch up on them. Sending Daniel back to school was tricky; his family’s biggest fear was losing Daniel to a vaccine-preventable illness after all he’d been through. In 2020, he had to leave his community again to attend an out-of-district private program so he could make meaningful academic progress at school.

Today, Daniel is in remission, but still faces many complications. He had to relearn how to talk, walk and use his left hand, and continues to receive physical, occupational and speech therapy. Prior to his cancer diagnosis, he was projected to grow to about six feet tall, but at 7 years old, his height is at less than the first percentile for his age group. He relied on a nasogastric tube as his main source of nutrition for more than 16 months, and returned to Philadelphia for a five-week, full-day feeding program in order to wean off it. Soon, Daniel will start seeing an endocrinologist to help with the late effects of his cancer treatment.

He also developed high-frequency hearing loss as an unfortunate side effect from the outdated chemotherapy he received. Despite reaching out to a top tier research institution, the newest drug available in Daniel’s treatment protocol had been developed in 1989. This is why Daniel’s parents believe pediatric research funding is so important.

Daniel’s parents are so grateful for what Alex’s Lemonade Stand Foundation does, and for where Daniel is today. While living life at breakneck speed and packing experiences in between 6-month scans, they plan for what they hope will be a long future for him. In the end, their biggest hope is to be able to look back and say Daniel was given a happy life, no matter how long it was.

Donate in Honor of Daniel Today!