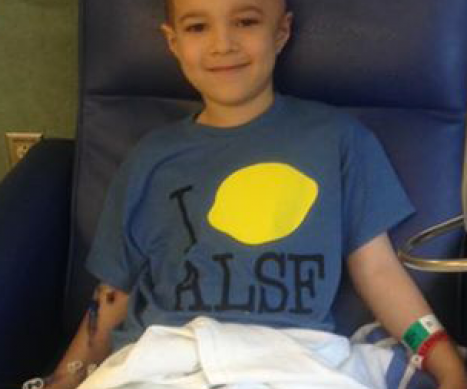 Eli is a sweet, energetic and kind boy. He is thoughtful of others, and loves to laugh, play pranks and read. Just before Thanksgiving, Eli began complaining of headaches. Because he rarely complained (unless someone took away his DS!), his parents knew something must be really bothering him. Since it was right in the middle of flu season, Eli’s doctors assumed he had the flu, especially because he seemed to feel better when he slept. However, Eli’s parents could tell something was wrong, and took him to the doctors several times without any relief. Eli’s normally cheerful demeanor became very quiet, and as with a migraine, he only wanted darkness and sleep.

On Thanksgiving Day, Eli’s family travelled to spend the day with family, but Eli became sick in the car and had to go home with his dad. In the following weeks, Eli’s headaches subsided, but his vision became noticeably affected. Eli’s mom had set up an appointment with the eye doctor for the day after Christmas. The eye doctor looked at Eli’s optic nerves and sent Eli’s family immediately to the ER. The doctor had seen papilloedema, a swelling of the optic disc usually caused by intracranial pressure.

By midnight that night, Eli’s grandparents had arrived to watch his sister and “the whirlwind began.” Neighbors and friends stepped up to help.

At the hospital, Eli was given a CT scan and admitted to the PICU. In a fortunate coincidence, the fill-in doctor at the hospital was the chief of neurosurgery at Levine Children's Hospital in Charlotte, NC. Eli was then transferred to the hospital in Charlotte and two days later had surgery to remove a mass. The hard news came while Eli was still in recovery: the mass was determined to be a glioblastoma - a very aggressive cancer.

Eli has since undergone multiple surgeries, radiation and oral chemotherapy.

During Eli’s second and third surgeries, just a day apart, Eli’s parents needed a place to sleep so they could each have a chance to rest and trade off being with Eli at the hospital. The ALSF Travel For Care Program helped pay for lodging nearby. “Having the room away from the hospital allowed us as parents to rejuvenate for the next day of support to our son,” Eli’s mom, Carrie, wrote. “Alex's Lemonade Stand Foundation was a little ray of sunshine that peeked through on a really tough day.”

Eli remains in treatment today. His parents hope for Eli to be cancer free and one day return to being the carefree child he once was. Eli remains his parents’ hero, hardly crying, complaining or even looking sad. Eli is very pragmatic about his current challenges and continues to fight every day. Eli’s mom writes, “I wish every day that I could shoulder all of Eli’s burdens for him. No young child should ever have to shoulder the heavy burdens that cancer lays upon their shoulders.”

Eli’s family is trying to take each day as it comes, though some days are harder than others. His mom writes that coping with Eli’s cancer has caused her to “slow down in this fast paced world and take each moment as it comes. It has been the one tactic that has sustained us. I often tell myself to "be the leaf.”

Hero Quote: "It was wonderful."  What Eli says anytime you ask him about an event he attended or his day!

Donate in Honor of Eli Today!