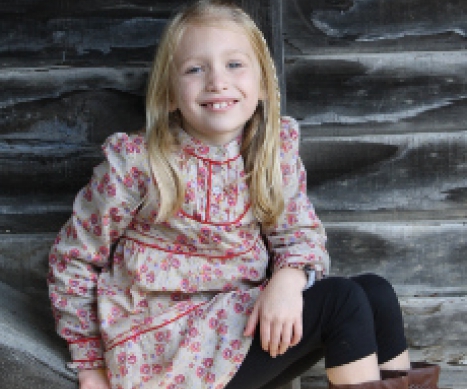 Endsley turned two in June of 2008. Early one morning in August while sleeping in my bed, I felt a knot on her belly. After x-rays, ct scans, and ultrasounds, the doctor determined it was a tumor in her abdomen and scheduled surgery. The surgeon removed a 2 1/2 pound tumor on her bladder. She was diagnosed with rhabdomyosarcoma. Our world became a revolving door of doctor visits, chemo, and blood draws. Endsley had a port inserted, and started chemotherapy on our 9 year wedding anniversary. She underwent 48 weeks of chemotherapy, which required several overnight stays on IV fluids. In March of 2009, Endsley, her grandma, and I went to MD Anderson in Houston, TX for 6 weeks of proton beam radiation. Our oncologist at WVU Children's Hospital determined that the level of standard radiation would be devastating to her young body. Endsley finished up chemo in July of 2009. Her port was removed in September of 2010.

Throughout her whole journey, Endsley remained a source of light and strength, even at such a young age, her determination has been evident.

Endsley enjoyed playing t-ball, swimming, and playing with her older brother Preston, despite receiving chemo weekly. You would have never known she was in treatment. Looking back, we now see what a huge blessing Endsley's cancer was. We use her story to bring hope and comfort to other families just starting on their journey.

Donate in Honor of Endsley Today!