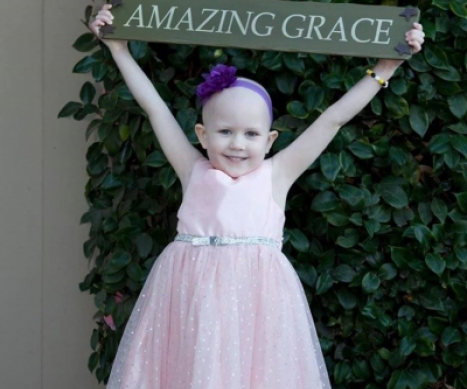 Grace’s family calls her their “Ninja Princess” because she loves to karate chop her cancer! Grace is rambunctious, tenacious, spunky and curious. She loves swimming, playing with friends, playing with dolls, dressing up and dancing like a princess (when she's not being a ninja).

Just a few weeks after Grace's fourth birthday her mom started to notice abnormal bruising. Grace’s pediatrician said it was because Grace was so active. Within a week Grace got a giant purple bruise down her side. Her parents took her back to her doctor for bloodwork. That weekend her parents got a terrible phone call: “I'm so sorry to tell you this over the phone, but Grace has every symptom of leukemia. You need to take her to the ER immediately."

They went to the local ER and were transferred to Children's Hospital Los Angeles by ambulance at midnight. Grace was in good spirits, chatting and flirting with the EMTs and telling them that she was a ninja in training.

Tests showed that Grace had a genetic mutation on her cancer cells, the Philadelphia chromosome, that made her cancer replicate rapidly and resist chemo. Thankfully, Grace was able to immediately enroll in a clinical trial for the medicine Dasatnib to counteract the genetic mutation in her cancer. She was also put on a high-risk protocol of very strong chemo.

She spent over 100 days living at CHLA and she had several sets of high-doses of chemo. She suffered many side effects, which, while fortunately not life threatening, were very painful. She had severe mucositis, nerve nueropathy and severe constipation that required hospitalization. She is now in maintenance and her family is very hopeful that she will continue to do well battling her cancer.

Grace dreams of being a mermaid. And being a cook. And being a waitress. And a ninja. And sometimes she wants to be a ninja that cooks while underwater. Her mom’s dream for her is that she realizes how strong she is and that no matter the odds, that she can live life with joy and peace. Grace’s cancer journey has revealed not only her strength but also her compassion. Grace is always scanning the hospital to see if there are other kids who are afraid. She goes to them, explains her port access and tries to cheer them up if they're sad.

Hero Quote: “I'm a ninja. I practice every day.”

Donate in Honor of Grace Today!