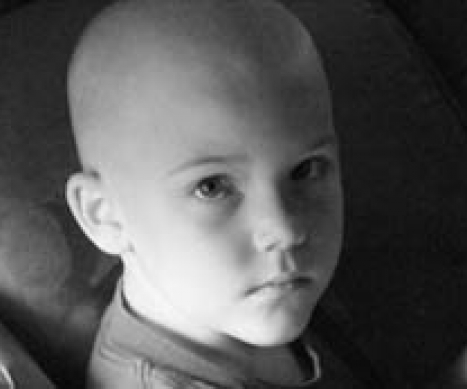 Our then 7-year-old son Grant was diagnosed on September14, 2009 with T-Cell Acute lymphoblastic leukemia (ALL). When his symptoms had first started (only 5 days before diagnosis) we thought he had a stomach bug. He was running around playing like any other child and then he would stop all of a sudden and say he felt sick. He would go to the bathroom, vomit and 2 minutes later be running around again as if nothing had happened. OK, stomach bug, right? Then that weekend he started having nosebleeds. They would last maybe a minute or two then stop. Well, he's always had allergies so we assumed maybe it had to do with that. But, we set up an appointment with his doctor for Monday morning.  I had to work, so my husband, Michael took Grant to the doctor. They ran some blood work but said that their machine couldn't read it so they were going to send it to another lab. They said to call back in an hour or so. My husband took Grant and our youngest daughter, Elayna, out to eat while waiting on Grant's labs. Grant got sick again at the Restaurant. Michael called me at work and said, "I think you need to come home" (he never does that) so I left and was at home in 10 minutes. Right after I got there Grant's nose started bleeding again....only this time it wouldn't stop and he was bleeding fast.

Michael tried calling the doctor's office and they were out to lunch. While Michael talked to the after hours nurse, Grant's nose bleed was getting worse and he began to vomit blood. Without waiting for the doctor's return call we rushed Grant to Brenner's Children's Hospital. It only took a few minutes to get the news that no parent ever wants to hear. Grant has T-Cell ALL. His liver and spleen were enlarged and his white blood count was a staggering 316,000 (normal is 5,000-14,000). We were devastated. He was placed in PICU and sedated for 2∏ days. Luckily his kidneys didn't fail (as the Doctors thought they might) and he didn't have to be put on a respirator. They had expected Grant to be at the hospital a minimum of 2 weeks maybe longer...he was out on day 8. He responded to the chemotherapy so well the doctors could hardly believe it.  Grant has been though so much in the past 10 months but, he has also shown the kind of strength and courage you hardly see in most adults let alone children. He has had his ups and downs with the treatments but, he is in remission now and we hope that's the way it stays. He still has 3 years left in chemo treatments.

Grant is such a caring young man that through all of this, all he has talked about is doing things for other families with kids with cancer. There has been over $1100 raised in his name so far for the Leukemia and Lymphoma Society and we have a long way to go, but Grant is determined to raise money until a cure is found! Grant says when he gets older he wants to find the cure himself if they haven't found one before then. If there is a cure out there (and I believe there is) and the researchers don't find it first.....he will find it. When Grant focuses on something his focus doesn’t stray until he finds what he's looking for.

Grant is my Hero!

Donate in Honor of Grant Today!