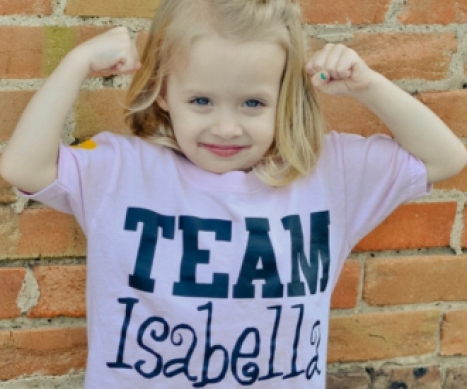 Isabella is a spunky 5-year-old, who has a zest for life. She finds joy in every situation and lets nothing get in her way of embracing life! She will be starting Kindergarten this year and is looking forward to big school!

When Isabella and her twin sister were nine months old, they were at their nine month well baby visit. When the pediatrician picked Isabella up to examine her, he felt a mass in Isabella's abdomen. He immediately sent Isabella and her family to Children's Medical Center Dallas to undergo a CT scan to try and figure out what it might be. Although her parents, Leslie and Tim,  hoped for the best, they were prepared for the worst. The days and tests that followed confirmed that she had stage IV neuroblastoma. She has a large mass in her abdomen and in her spinal canal that are inoperable due to the complexity of the arteries and organs it  intertwined with. She has been in the battle of her life for the past 4 years.

Once her family knew surgery was not an option, she underwent 12 rounds of chemotherapy. After the first 2 rounds, chemo no longer did anything to improve her condition. Since stopping chemotherapy, she has done Accutane treatment and had more surgery that again proved to be futile.

Isabella dreams about growing up and becoming a momma. She is such a sweet soul and just wants to love her kids.

Isabella is her parent’s hero because she has never met another person who takes each trial as an opportunity to be joyful and to bravely take on any challenge that is thrown her way. She struggles with pain but seldom complains. She is the strongest person Leslie and Tim know.

Leslie’s advice to others who may have recently received a cancer diagnosis is to take one day, one treatment, one breath at a time.  “It is by far the hardest thing we have ever journeyed through, but the things our family has gained in regards to our relationships with each other and how to better serve others, is worth the fight.  Hang in there!” say both Leslie and Tim.

Alex’s Lemonade Stand Foundation is meaningful to Isabella and her family because Isabella has been literally sitting and waiting for treatment to become available for her. Her type of neuroblastoma has very few treatment options and all available options for her have been exhausted. Her family hopes that they can play a small role in bringing awareness to the frustrating lack of funding available. Her family says that it is NOT ok for these kids to be waiting to be cured when more money could make it happen.

Donate in Honor of Isabella Today!