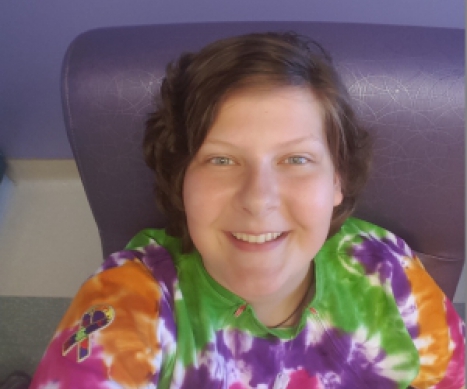 Julia is a kindhearted teenager. She has a strong faith in Christ. She has met many difficult challenges and side effects with her quiet perseverance and zest for life. One of the ways Julia has dealt with her diagnosis is creating videos about her cancer journey for her YouTube channel. She can be silly at times and is always looking for the positives in life. She loved playing with her local soccer team, but treatment and subsequent damage to her hips and knees have made it impossible to continue with the sport. Julia dislikes taking all of these necessary medications, but she is glad that the list is getting smaller as she gets closer to the end of treatment.

Julia developed a stuffy nose and swollen lymph gland during the summer before her diagnosis. Other than sinus congestion, she didn't really have any other symptoms at the time. She was laying around a lot, but it was summertime and all of her siblings were doing their fair share of lying around too. Her parents didn't give it much of a thought.  When one of her brothers developed a sinus infection and Julia's nose still hadn't cleared up, they went to see the family doctor. The doctor didn't believe that she had a sinus infection and found a very large gland on the side of her neck that had been hidden by her hair. It wasn't painful and she didn't realize that it was even swollen. The doctor was concerned that she may have an infected lymph node and prescribed an antibiotic. As the week passed, Julia became increasingly tired and was taken for a mono test. The following day, she spiked a temperature (while still on the antibiotic). Lab results showed that she did not have mono and that her blood counts were actually perfect. Because the lymph node had not improved, the doctor ordered a CT scan of her neck. That CT scan revealed COUNTLESS enlarged lymph nodes and adenoids that were swollen to the point of blocking her sinus cavity. The CT scan was the beginning, followed by consultations, surgery to remove her adenoids and biopsy lymph nodes and a rushed trip to the hospital nearly 3 hours away. While Julia's soccer team was practicing for the first time that season, Julia and her family were meeting her oncology team. Pathology from her biopsies and bone marrow studies as well as the PET scan all confirmed the diagnosis of T-Cell ALL.
Julia started treatment with 10-day inpatient to begin the Induction phase of treatment for ALL. Most of the first year included weekly and/or daily chemo in oral, IV, injection and IT forms. Early in the process, she developed a pill aversion that made taking her numerous daily medications very challenging. Twice a week, they would make a 3-hour trip each way to the clinic for a year. Julia is now 2 years into treatment and should be finishing in the next few months.

Julia and her family believed that after finishing the more intense frontline treatment would make the maintenance phase easier. However, Julia has experienced many difficulties with the maintenance phase. It is only in the past few months that they feel like they’ve been able to relax a little bit. Julia developed neuropathy in her legs and feet early in the process and required AFO leg braces and a wheelchair. She needed a lot of help with routine activities of daily living and had very little energy. She’s been hospitalized for both extreme nausea and mouth sores. There have been numerous inpatient stays, the longest being 29 days. She has taken several ambulance rides in the middle of the night and flew in a critical care transport once. She reacted to an antibiotic and experienced a scary neurotoxicity reaction from a different drug, within 2 days of each other. She endured full-blown, steroid-induced diabetes and severe bone pain throughout her body for several days after the steroid treatments. Chemotherapy damaged her joints and she’ll need both hips replaced as soon as she’s done and recovered from treatment. Her back and knees are also effected.

Schoolwork has been challenging, but she has worked very hard and done well. Julia also experiences some chemo brain effects, especially after her IT chemo into her spinal fluid. She’s received over 40 blood/platelet transfusions and 22 spinal taps to date. Physical therapy has been a big part of treatment since the beginning and will likely continue. Even though she is still in treatment, she is much stronger now than she was a year ago. It’s anticipated (with GREAT joy) Julia's treatment is coming to an end soon, but her journey will not be over. She will receive follow-ups until she’s at least 30-years-old.

Julia’s mother, Judy, says her hopes and dreams as a mother have changed because of this journey. She hopes for Julia to live a full, healthy life and that she’ll never have to walk this difficult road again. That she will be able to take what she has experienced and learn to use it in her own life and as she interacts with others. She has identified her passion to be a professional filmmaker and is taking steps to pursue her dream.  As a mother, she hopes for her daughter to will be a happy and healthy woman who will inspire and encourage others.

Julia is Judy’s hero because she has faced enormous challenges with a smile on her face, faith and a quiet strength that defies all logic. She is truly a superhero.  Even in the middle of cancer treatment, she routinely thinks of others before herself. Julia is a fighter and her mother admires her greatly for all that she has endured and for managing to maintain a joyful heart through it all.

Judy has many tips for families receiving the cancer diagnosis. She encourages families to really come together because you’ll need each other. Relationships may change in ways you’ve never imagined. Pediatric cancer is MUCH different than adult cancer. Caretakers MUST take care of themselves. It’s easier said than done, but is important. If the oncologist says they aren't worried, believe them. Try to rest in that. They will tell you if they are worried.

ALSF is meaningful to Julia’s family because of their efforts to fund research that will hopefully lead to safer treatments and cures. They practice integrity in managing monies donated. They offer encouragement to SuperSibs, because these kids can often be overlooked.

Donate in Honor of Julia Today!