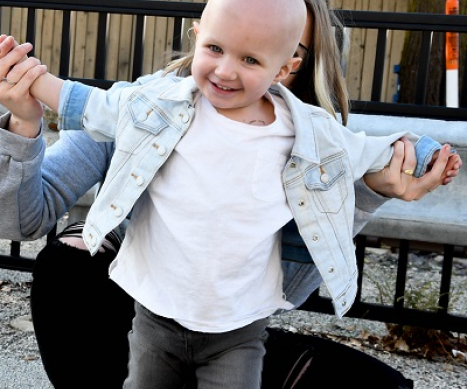 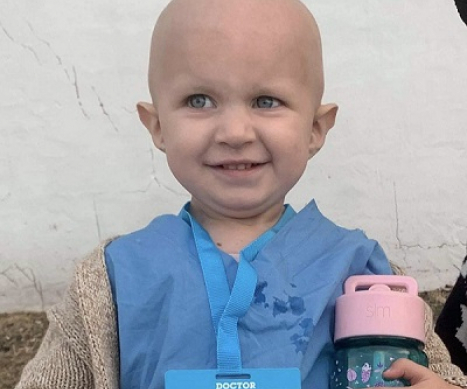 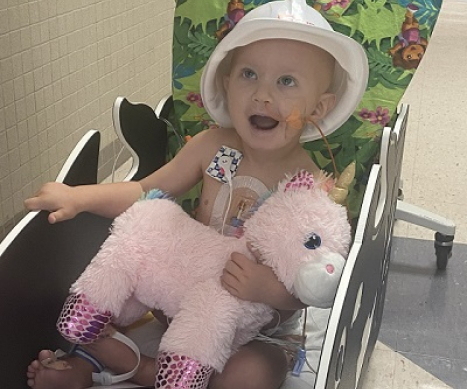 June is the spunkiest, sassiest 2-year-old you’ll ever meet. She loves animals and playing doctor or nurse. Despite everything that June has been through, she rarely loses the smile on her face. She brightens any room she walks into, and she doesn’t know a stranger – she can make anyone smile right along with her.

Before her diagnosis, June had been having concerning belly distention and intermittent constipation for about two months. Specialists couldn’t tell what was wrong. Different diets didn’t help, and symptoms kept returning even with new medications. The morning of September 20, 2020, she woke up with her belly bigger than it ever had been. Her parents, Ali and Adam, decided to take her into the ER, where she pleaded with doctors that there was something going on with their daughter beyond a gastrointestinal issue.

After some lab work revealed her blood pressure was extremely elevated, June underwent an abdominal ultrasound and CT scan, where they found her tumor. That night June was admitted to the hospital. She had an MIBG scan and biopsy the following days and found that the tumor in her abdomen had metastasized to her bone and bone marrow. She was then officially diagnosed with stage 4 intermediate-risk neuroblastoma.

After diagnosis, June went through eight rounds of chemotherapy. Thankfully, the treatment cleared her bone and bone marrow and shrank the tumor by about 40%. By this time it was May, 2021. She then had a tumor debulking and another biopsy. The biopsy showed matured-benign cells were left, so doctors started monitoring the tumor. On July 26, 2021, after consistent fevers for over a week and new belly distention, they found that June’s tumor had started progressing again.

June’s mom, Ali, dreams of a future where June beats neuroblastoma. She hopes to see her daughter start Pre-K with her friends and to live a normal life, not in hospitals 24/7, but as a kid. She hopes that June can become the doctor or nurse that she wants to be. And she hopes that childhood cancer starts to receive more funding so they can develop kinder more effective treatments.

“June is my hero because at just two years old she has persevered and fought and inspired so many people along the way,” said Ali. “She has gone through so much and never loses her smile. Even when she’s connected to all of her IVs and tubes and wires, she just acts like a normal kid without a worry. People tell me on Facebook how she has inspired them to be kind to others or how she’s inspired adults to keep fighting in their cancer battles. June is my biggest hero and I’m so proud to be her mom.”

Ali also understands how hard this journey is as a mom of a child with cancer. She says it is the hardest thing that she's ever done, but it has put a whole new perspective on life for her. She loves harder, doesn’t let little things bother her as much, and she has seen how kind people can truly be. Because of this journey, she is able to live in the moment better and enjoy the little things.

One of the things that has been a source of comfort during June’s cancer journey is Alex’s Lemonade Stand Foundation (ALSF)’s website. Ali loves that she has access to statistics and stories, and can share it. “It can make childhood cancer real to people that have never experienced it,” Ali said. “ALSF to me is the ultimate advocate for childhood cancer. It gives me hope that someone else is fighting for my child and the others just like her. It gives me hope that people care and that one day there will be a cure.”

Donate in Honor of June Today!