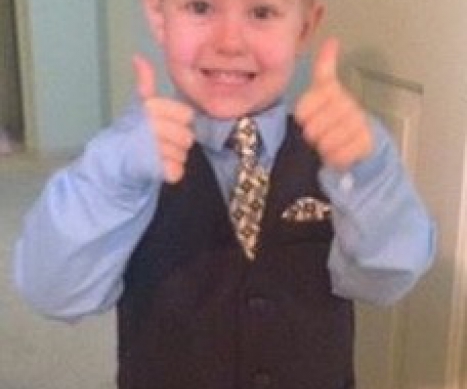 Justin was a generous, intelligent, caring five-year-old who loved Legos, fire trucks and being with his family. He and his dad, Patrick, would go out on Sundays for haircuts and ice cream and he made sure to tease his dad about his boring vanilla ice cream with sprinkles. He also loved going with his mom, Mistie, to Whole Foods to grocery shop and have lunch on the tailgate where he ate his favorite Asian dim sum sesame balls. Justin was known to be a little flirt and enjoyed making all those around him happy. He loved laughing, telling silly jokes, taking funny selfies and playing pranks. He had a pure, innocent spirit and loved Jesus.

Patrick and Mistie started to notice that Justin was losing his balance and bumping into things, so they took him in for an eye exam thinking he needed glasses. After finding out his vision was perfect, they were referred to a neurologist, who immediately noticed that something was wrong based on the description of his symptoms. Justin went in for an MRI and a few hours later, his parents were given the devastating news that their only son had an inoperable brain tumor, diffuse intrinsic pontine glioma (DIPG). At the time of diagnosis, the Seiler family was stationed in Singapore, where Patrick was working with the U.S. Air Force. Upon learning that Justin had DIPG, Mistie and Justin flew back to Ohio to begin treatment while Patrick and their daughter Jessica stayed behind. After deciding that proton radiation would provide their best chance for shrinking the tumor, Mistie and Justin traveled to Loma Linda, CA, where Patrick and Jessica met up with them. Several weeks later after finishing radiation, they flew back to Ohio. A subsequent MRI showed that the radiation had worked - Justin's tumor was shrinking - but sadly, it also began to spread. At that point, they made the decision to bring Justin home so their family could be together to and enjoy as much time with him as possible. Julie, Justin's big sister, was able to make the trip to Ohio, as were countless family members and friends to surround Justin with love, peace and happiness during his final days.

DIPG is one of the worst types of childhood cancer. Not only is it a death sentence, but even while the tumor is incapacitating the child's ability to move, eat, and breathe, the child is completely alert and aware of what is going on. Through it all, Justin never complained or asked why it happened to him. When his parents explained his diagnosis to him, Justin told them he wanted them to stop crying and he didn't want them to be sad. Justin was the very definition of true courage and strength. He didn't blame God or the world or ask why it couldn't have been someone else. Instead, Justin looked DIPG square in the face and put forth every ounce of fight within him, never backing down, never giving up.

The loss of a child is immensely tragic. There are no words to describe the grieving that follows, the hole in your heart or the void it leaves. The Seiler family have made it their mission to carry on the legacy of their precious son, who hated to see others sad or in pain, by volunteering for childhood cancer organizations. Some days the pain is crippling, so bad it takes your breath away, but they know that sharing Justin's story and his incredibly giving spirit will allow him to live on. Justin became an inspiration to every one of the many lives he touched. He will never be forgotten.

Supporting other families whose children have been diagnosed with cancer allows the family to give back to those who supported them on their journey. They also hope to raise awareness - only FOUR percent of the NCI's budget goes toward pediatric cancer research and of that, DIPG gets less than $1 million total. That's not enough to fund even ONE clinical trial! Many DIPG families have made it their goal to find a cure, or at the very least, a viable treatment option, to prevent any family from experiencing the tremendous loss the Seiler family has. Cancer is the leading cause of death among children, and that is simply unacceptable. No parent should ever have to bury their child.

At Justin's funeral, his sister Jessica said that Justin was the best brother ever, the best anyone could have.

Donate in Honor of Justin Today!