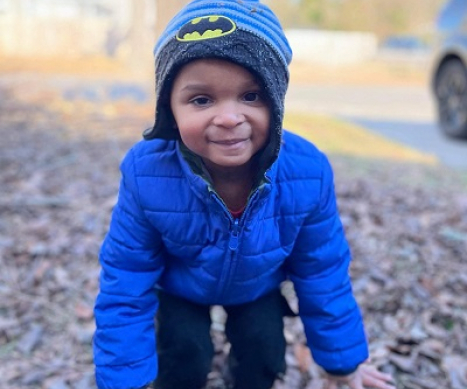 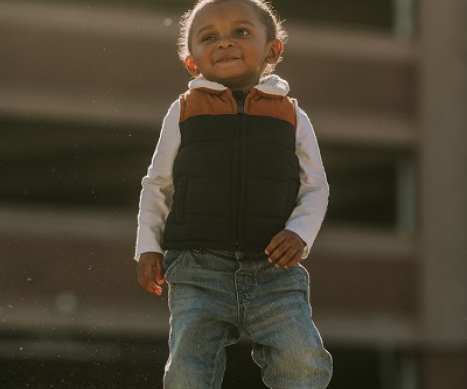 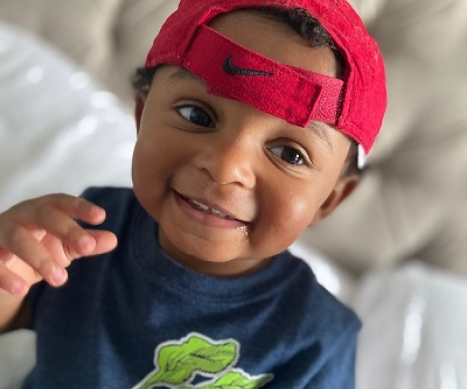 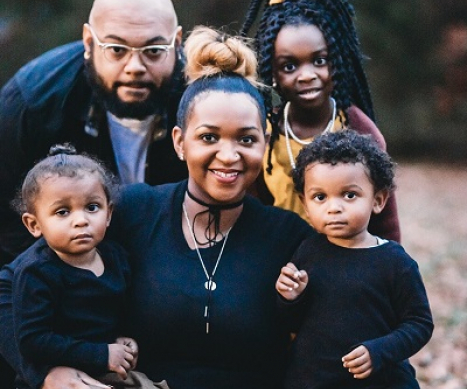 Get the facts about Retinoblastoma and how our research projects are making a difference.

Kade is a smart, loving, protective 2-year-old who is the life of the party. He loves making people laugh. His favorite things are waffles, fresh fruit, music, monster trucks, anything marvel and watching Blues Clues and Paw Patrol. He also loves to dress up, especially in nice shoes. Kade adores his sister and has an unbreakable bond with his twin brother, Christopher. He cares deeply for his family and is always checking on them. He’s a beam of light and such a strong kid.

One day, Kade’s mom, Kennedy, noticed a cloud-like film in his eye. The weird dot showed up again in a photo, and as time progressed, it grew. When she tried to show family members, close friends and even their pediatric doctor, no one could see it. The strange dot seemed to only appear in low lighting or at dusk.

Then she came across retinoblastoma in an article online. Like any mom, she began to worry even more, and after showing Kade’s dad, Ryan, they took him to see their family doctor. Unfortunately, their doctor also couldn’t see anything, but passed their information on to a pediatric eye doctor for a closer look. The rapid rise of COVID-19 meant they couldn’t schedule an appointment until early July 2020. As time passed, the spot continued to get bigger, and Kennedy tried taking more pictures. By June, she had pulled enough pictures for others to see the spot. During Kade and Christopher’s wellness check, their doctor also saw it, and told them to be patient and wait for their July appointment.

When July 17, 2020 finally came, they were told there was a mass in Kade’s retina. He was confirmed to have retinoblastoma. From that day on, their lives were forever changed.

Kade received his chemotherapy treatments through a concentrated dose delivered to the ophthalmic artery, the primary blood supply at the back of the eye, called the intra-arterial chemotherapy method. To get to that specific artery, a catheter had to be inserted through a microscopic hole in his groin and threaded through arteries. Being that Kade was in the infant/toddler category, he had to stay sedated for about six to eight hours and closely monitored. He couldn't run, jump or climb because any sudden blunt movement could rupture the artery, making it fatal.

Kade is his family’s hero because even at such a young age, he has shown so much resilience. Kennedy believes everything happens for a reason, and although this may not have been the most ideal thing, there was a lesson in all of this. Kade has bounced back, and today he is in remission. At times when he would catch his parents crying, he would ask if they were okay. Seeing him push through and fight was inspiring.

Kennedy hopes that her family can soon move past this and rebuild. On the day Kade was diagnosed, his big sister, Karter, had received a letter of acceptance to a private school that specialized in art and science. Unfortunately, due to the financial constraints that came with Kade’s diagnosis, they had to decline the offer. Kennedy hopes the financial stressors that come with a childhood cancer diagnosis will go away one day. As far as Kade, his family hopes he knows that the sky is the limit for him, and he can use his experience as a testimony. She would also like to start a non-profit organization or help catapult a test for infants to see if cancer screenings can begin at an early age.

The advice Kennedy has for other families who may be facing a childhood cancer diagnosis is to try to find the silver lining. Stay together as best you can and don’t lose sight of the goal: the safety and wellbeing of your child. Don’t be too prideful to not ask for help along the way. Process your emotions and know that the trouble won’t last forever. Don’t be afraid to ask questions. COVID-19 policies only allow one parents the post-operative and recovery rooms, so make sure parents are taking turns sharing the load.

One of the most helpful things has been the support they’ve received from Alex’s Lemonade Stand Foundation’s (ALSF) Travel For Care program. Having a reduced income during COVID-19 spelled a complicated financial situation for Kade’s family. “Cancer doesn’t come with an email, call or letter letting you know it’s going to infiltrate your life,” said Kennedy. “We were not prepared for this, so ALSF helped by providing gas, lodging, and grocery cards. They gave us peace of mind!”

Donate in Honor of Kade Today!