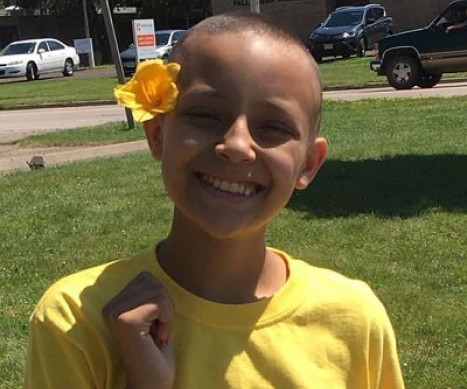 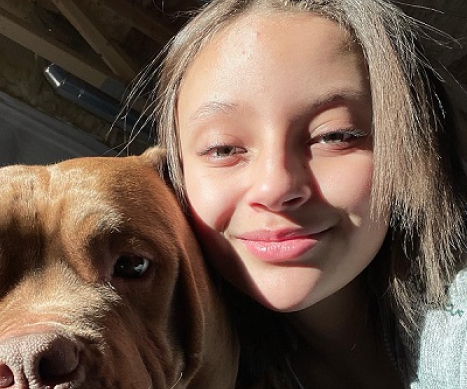 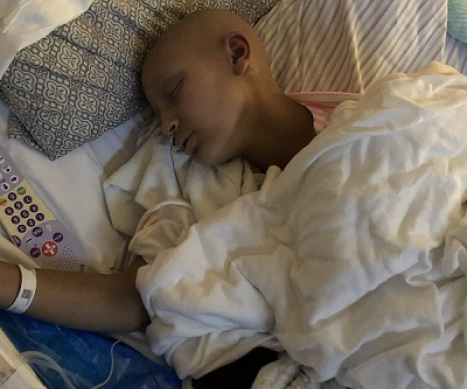 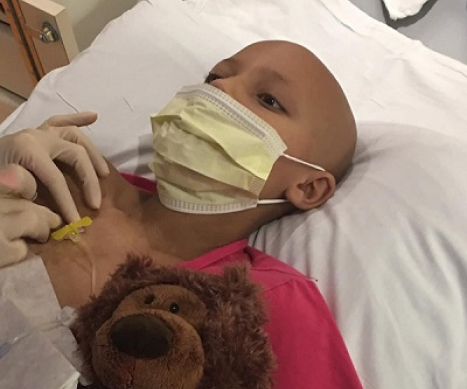 Kadi is a very spirited and artistic teenager who loves expressing herself through sketching, painting, makeup and nail art. She enjoys cuddling with Max, her fur baby, listening to music and playing Roblox with her friends. Despite fighting cancer twice, Kadi has never lost her precious smile and charismatic personality. She continues forward in life with the most optimistic attitude.

In February of 2019, Kadi began having lower leg pain. At first, her doctor attributed it to growing pains, but a month later agreed she needed X-rays to confirm. The radiologist noted something “small but unusual” in Kadi’s lower left leg. By the end of March, Kadi was in unrelievable pain from a clear deformity of her leg and was taken to the ER. Thirty minutes later, the doctor informed Kadi’s mom that Kadi had a large, aggressive tumor that had snapped and “eaten” through some of her fibula bone. Kadi was immediately sent to the University of Minnesota Masonic Children’s Hospital.

After a biopsy, bone scan, MRI and CT scan, Kadi was diagnosed with chondroblastic osteosarcoma.

Kadi started chemotherapy that same day. She received the standard protocol for osteosarcoma, called MAP, which consists of high dose methotrexate, doxorubicin and cisplatin for 28 weeks. She also had two-thirds of her fibula and perennial nerve resected, leaving her with permanent drop foot. Another complex hip surgery called a pelvic osteotomy with allograft reconstruction took 12 hours. Her surgeon wasn’t sure she’d walk again, but Kadi not only narrowly escaped full amputation, she was walking four days later with assistance! Kadi was finally declared NED, having responded wonderfully to chemotherapy that localized her cancer. All things were in her favor.

Unfortunately, three-and-a-half months later, doctors found another large tumor in her right pelvis, along with disease infiltration to several lymph nodes. The treatment she received this time was ifosfomide and etoposide. Every time Kadi would walk onto the oncology floor for treatment, she’d say “Well here we go again, kicking cancers butt!” Thankfully, with the help of Kadi’s positive attitude, the chemo eradicated the cancer, and today Kadi is 21 months NED, doing well and living life again.

Sarah also had advice to share for other families who may be facing a childhood cancer diagnosis: “At the very beginning, know that the soul crushing, unbearable pain you feel won’t go away, but it will lessen. Right now your world is upside down but in weeks and months this will be your new normal and you will learn things about yourself and your child, and at the end you will be thankful for it all. I recommend researching whenever your heart will allow, learning the ins and outs of the cancer, the treatment, etc., because if you don’t, you can’t be your child’s best advocate. The journey will feel like a lifetime on one hand and on the other it’ll feel as though it went by in the blink of an eye! The days ahead are uncomfortable, stressful, terrifying and unnerving but it is part of your child’s time on this earth so relish every moment, make treatment fun whenever possible, and make memories just as you would had cancer not interrupted your whole world. You will get to the other side and you’ll – in an odd way that nobody will understand – be a better person for it all.”

However, Kadi’s troubles are not yet over. Her chemotherapy induced early-stage kidney failure and progressive cardiomyopathy. And although her chronic pain isn’t debilitating, her medical team informed Kadi’s family that due to the nature of her relapse it is likely she could relapse again. But now, Kadi is out of curative options.

Sarah has kept close tabs on all of the amazing work Alex’s Lemonade Stand Foundation (ALSF) does, from the advocacy for children and families, pertinent research for better treatments and of course the search for a cure for childhood cancer. She is appreciative of ALSF’s involvement in the pediatric cancer communities nationwide and overall making things better for kids. She hopes to get involved in any way possible in the future.

Hero quote: “I don’t want my cancer to be who I am anymore; I want to move on from it and live like it never happened.” - Kadi

Donate in Honor of Kadi Today!