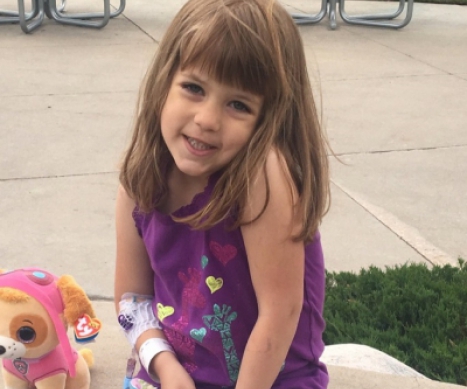 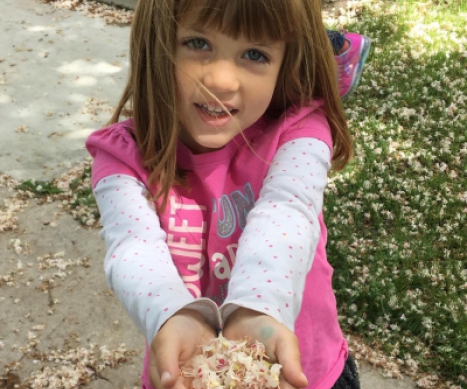 Get the facts about Chronic Myeloid Leukemia (CML) and how our research projects are making a difference.

Kensley is a beautiful little 5-year-old who loves her family. She is sweet and sensitive and full of life. When she gets ready for the day, she adorns herself with every bracelet she owns, earrings, necklaces and a crown. She truly shines.

On May 13, 2019, Kensley’s mom, Tina, got a call from Kensley's pre-school teacher asking her to pick her daughter up. Kensley had a fever and possibly a UTI. Tina immediately took her to urgent care. After the doctor ran some tests and determined there was no indication of an infection, Tina mentioned some bruising in multiple places on Kensley’s body. Each bruise had peculiar little notches on it, but Kensley said she had no memory of how she got them. The doctor ordered a blood test to look for signs of anemia or a vitamin deficiency. He said he would have the test results back pretty quickly and that he would follow up.

The phone call came two hours later with some surprising news. Kensley had an alarming amount of white blood cells and an extremely low amount of red blood cells. Then the doctor said, “I don’t want to scare you, but we may be looking at the possibility that your daughter has leukemia.”

Tina was advised to take Kensley to the emergency room right away where it was confirmed that Kensley had a form of leukemia. Kensley was sent from the hospital in Montana to Children’s Hospital Colorado in Denver to determine what type of leukemia it was.

As soon as they arrived, Kensley was hooked up to IV fluids, then monitored through the night. The next morning, doctors performed a bone marrow aspiration, and discovered Kensley had chronic myelogenous leukemia, or CML.

In a matter of two days, Kensley’s life had completely flipped upside down.

Now, Kensley will be treated in her hometown. She will undergo chemotherapy administered in pill form once a day. She has monthly oncology appointments where she has her blood drawn to check her white blood cell count. She also will have a bone marrow test every three months until she reaches remission. Her family is currently running a GoFundMe to help alleviate the unexpected expenses.

“Receiving a cancer diagnosis is scary,” said Tina, “Having a child with cancer changes you. You breathe deeper, love harder, forgive more. Is it hard? Absolutely. By far it’s the hardest thing I have ever faced as a parent.” However, she reassures those who are also facing a cancer diagnosis to take it one day at a time. “Don't give up. And find your tribe of support people.”

Kensley is her mom’s hero because in spite of it all, Kensley smiles. Her attitude toward treatment radiates positivity, and Tina hopes her “sunshine girl” will achieve a treatment-free remission soon.

Tina believes in Alex’s Lemonade Stand Foundation’s mission because she thinks it is unfair that so little of the National Cancer Institute’s annual budget goes to helping kids with cancer. Currently, only 4% is allocated to pediatric cancer research. Fundraising is critical, because kids get cancer too.

For updates on Kensley’s story, visit her Facebook Page.

Hero quote: “I love you forever and ever and always.” - Kensley

Donate in Honor of Kensley Today!