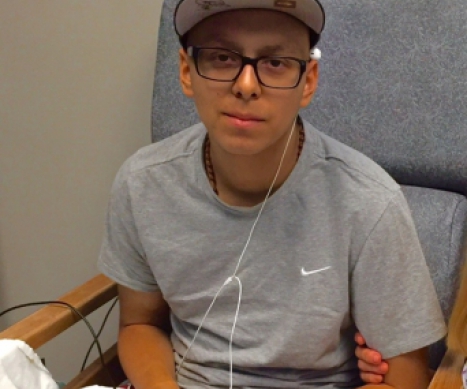 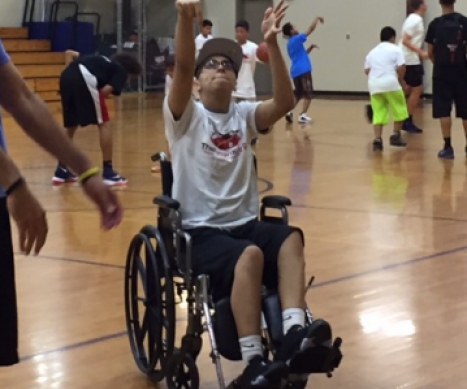 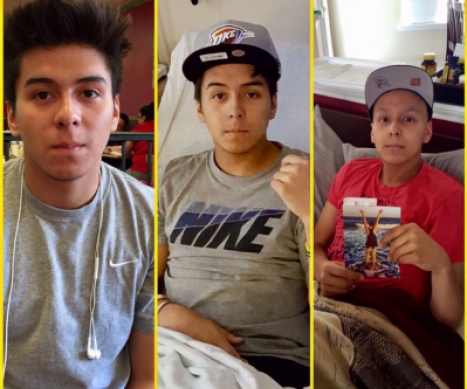 Michael is a strong and tough kid. He always has been. He's been doing great in school despite being dyslexic. He loves to play and watch sports. His favorite sport is basketball and his favorite teams are OKC and the Spurs. His favorite football team is the Seattle Seahawks. He's also addicted to buying shoes, both athletic and casual.

In December of 2015, Michael started practice for a new basketball season after taking a season off. During his first practice he felt as if he pulled his quad muscle. He iced, stretched and rested it and went back to practice. The pain would come and go so he had to sit out quite a few games. When he did okay, he would end up limping by the end of the game. Once the season was over, he got more rest and it seemed to heal. Once he started playing basketball outside with friends, the pain came back. From the time the pain started until he was diagnosed, he saw three different doctors who all said it was a strained muscle. In February, one doctor requested an X-ray, which came out fine. By the end of April, Michael's pain was so bad that he missed a few days of school. I requested an MRI and on May 3 the tumor was found. On May 11 during a biopsy, Michael was officially diagnosed with osteosarcoma. He started chemo on May 23 and on June 29 the tumor was removed during limb salvage surgery, which included a hip replacement and femur reconstruction. On September 29, a CT scan showed that the cancer spread to his lungs and his course of treatment was revised to include two new chemotherapy drugs. He is set to start his second round of the new chemo.

On May 23, Michael started chemotherapy with Doxorubicin, Cisplatin and Methotrexate. On October 11, he started Ifosfamite and Etoposide.  Just recently, Michael’s family learned his current chemotherapy drugs have become toxic to his body and will have to be discontinued. His doctors will be reaching out to facilities and doctors in other states to see what they recommend on how to continue treatment.

Michael's goals are to beat cancer, go back to school for his senior year and finish high school with his graduating classmates in Spring 2018. Ever since Michael found out about his tumor and cancer he's never stopped fighting and has never given up on his goals. There are times when he gets down but he doesn't stay there long at all. Michael does not feel sorry for himself and doesn't expect anyone else to either. He keeps looking forward to his future and has big plans.

Michael’s mother Jessica wants others, who may have recently received a cancer diagnosis, to know to learn to accept help from others both emotional and financial. If you feel you need help with anything ask for help because there will be people there that want to help you, even with the small things.

Alex’s Lemonade Stand Foundation means a lot to Michael’s family. It means knowing there are people out there that are making a difference to help find a cure for childhood cancer. ALSF provides various ways for everyone to get involved and help raise funds.

A quote Michael’s family tries to remember is “No one fights alone.” Although there are times when they feel so isolated from everything and everyone, they are reminded that they are not alone. The family has grown so much since Michael's diagnosis, they have so many people praying and rooting for Michael to beat cancer.

Update: In May 2018, Michael sadly passed away after bravely fighting his cancer since May 2016.

Donate in Honor of Michael Today!