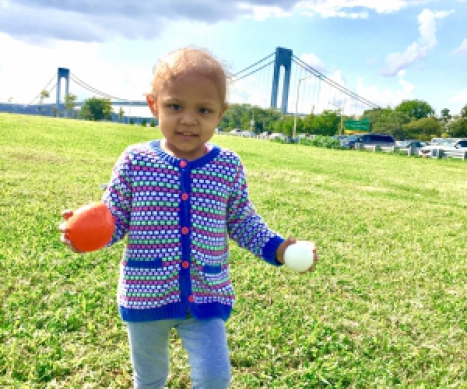 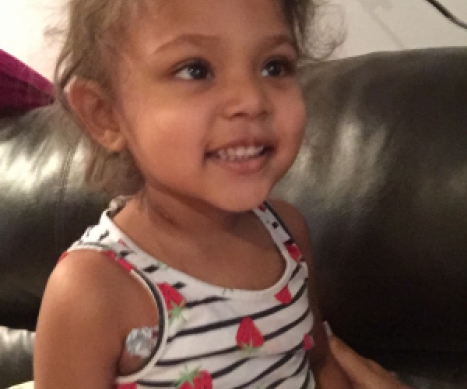 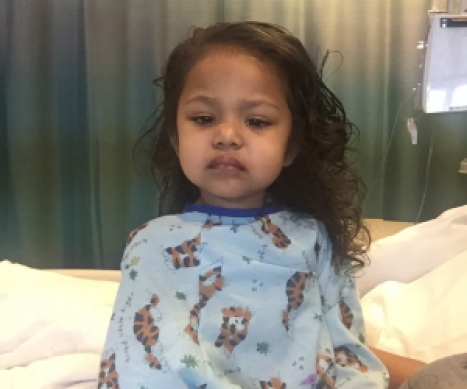 Penelope is 3 years old and she is one sassy toddler! She's independent, artistic and loving. She loves coloring, playing with her toys and watching endless Peppa Pig and Ben and Holly (she only watches British cartoons). She loves going on walks and riding her little car. Penelope is also on the spectrum so she still doesn't have speech and likes to be by herself.

Penelope was showing strange signs when she was tired all day and would not eat--which is very unlike her. She was vomiting everything she ate and was severely sick. They went to the pediatrician and were advised to go to the hospital where they did several tests. After blood work, physical tests and an ultrasound, they found a mass in her abdomen that was obstructing her intestines, causing her to vomit and avoid eating.

After an MRI, a biopsy confirmed it was a cancerous tumor called rhabdomyosarcoma. Penelope’s parents were shocked and wondering how this could happen to them. She went to surgery where they put in a port and started chemotherapy right away. After two months of chemo she needed surgery to remove her tumor. The chemo was supposed to shrink the tumor, but it actually became larger- so it needed to come out. They took out the 2.5 pound tumor in surgery and Penelope recovered like a pro. Her chemo and radiation continued afterwards to make sure the cancer doesn't come back, with chemo set to end in April 2018.

Her parents hope that Penelope will be cancer-free and that this cancer will never come back. They pray for it every day and will continue to pray for it. They want her future to be bright and full of possibilities, with a normal life like any other toddler as she continues down her creative path.

Penelope inspires her parents every day because she's only two and has displayed strength, resilience and happens to be fighting the biggest bad guy in the world - cancer. In spite of what’s happening to her, she’s still smiling and comforting her parents. She will always be their superhero and warrior princess.

Even though their journey is new, they want others to know the importance of surrounding yourself with positivity, faith and loved ones. This fight has its ups and downs. You will be overwhelmed with so much that the average person can’t even fathom it. But the best thing to do is take each day as it comes. Don't worry about what might happen or what could happen--worry about now. You will be bombarded with a ton of information and opinions, but the best thing to do is take it easily. Prayer is stronger than any medicine and can make miracles happen. Three things to keep in mind is prayer, positivity and patience.

They have benefited from Alex’s Lemonade Stand Foundation’s travel for care program to help reach treatment options. Beyond just the financial help, to them the Foundation means that people are listening and care. They want childhood cancers to be first on the government’s priority list. There needs to be a cure, and because of places like ALSF, awareness is causing people to listen.

Penelope does not have speech yet, but her family has one poem they live by:

Warrior
Watch me.
I will go to my own Sun.
And I am burned by its fire,
I will fly on scorched wings.

Donate in Honor of Penelope Today!