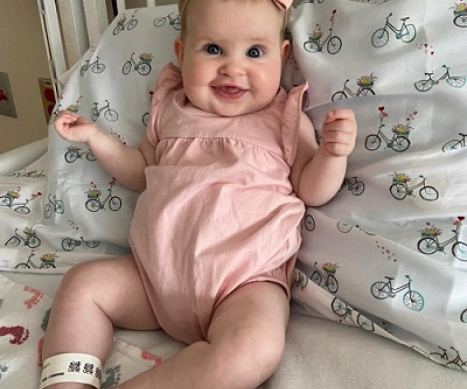 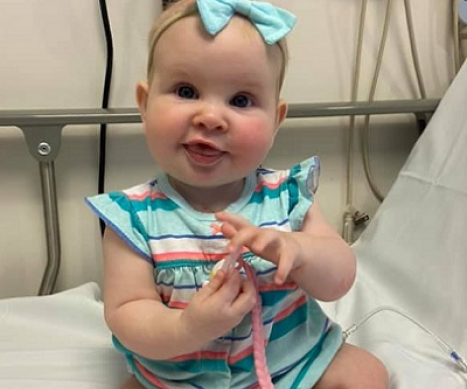 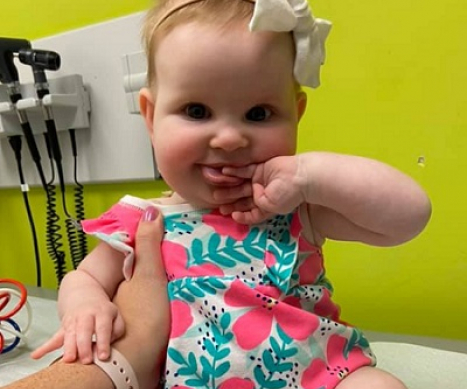 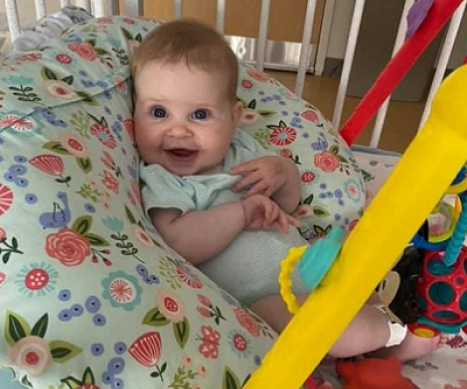 Scarlett is a genuinely happy baby. She always gives everyone she meets a smile. Even during the COVID-19 pandemic, she can still tell people are smiling back under their masks. One doctor wrote in her chart that she has a bubbly personality and friendly demeanor (meaning this isn’t just a mom’s opinion, it’s clinically documented!). She is always so curious about everything going on and likes to get out and go for walks with her family when she is away from treatment. She dislikes when she’s tired or hungry, as well as driving over potholes in the city on her way to and from the hospital.

At Scarlett's 2-month checkup, the pediatrician noticed that her liver felt a bit odd. Her parents decided to keep an eye on it, and at her 4-month checkup her main pediatrician agreed that her liver felt like it might be enlarged or lower than normal. A few days later, Scarlett had bloodwork and ultrasounds done. While driving home from the appointment, her parents received a call with devastating news: a large mass was found in Scarlett’s abdomen. They would need to pack their bags and take her to Johns Hopkins Hospital immediately.

An MRI, biopsies of the mass and bone marrow, X-rays and an MIBG scan confirmed Scarlett’s diagnosis of stage IV neuroblastoma. She started chemotherapy treatments on a clinical trial. As of January 2021, she had completed her chemotherapy and had her central line removed.

Scarlett is a hero to her family because, even though she is such a little person going through so much, she has handled everything so far with a smile. She is so full of life even when she is having a rough day. On top of it all, she is still enduring all the typical things babies go through, like growing pains, teething and learning new skills.

Morgan, Scarlett’s mom, wants others who may be experiencing a cancer diagnosis to know that you may find support in places you never even thought about. The more you share your story, the more you can learn from others going through difficult times and how they’ve come out of them as well. She also says that hope and positivity can go a long way.

In college, Morgan first heard of Alex's Lemonade Stand Foundation (ALSF) from fundraisers held in her campus gym. “I never thought later in life I'd be so directly tied to this organization,” she said. “I recently read an article about advances in neuroblastoma treatments and ALSF was cited as support for the research. I knew I wanted to get more involved with the Foundation at that very moment.”

Since then, Morgan has formed a Million Mile team that raised more than $2,500 on their first day and $7,400 by the end of the month. She was so excited to be a part of such an awesome activity during Childhood Cancer Awareness Month and is looking forward to more.

Donate in Honor of Scarlett Today!