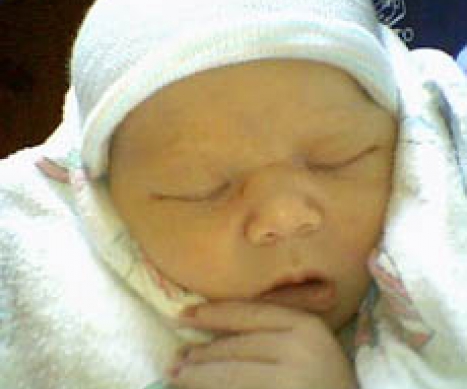 Sweet little Addison Rose will live on forever in my heart as a hero. We all awaited Addison’s birth as any other family would. We looked so forward to meeting her, holding her, watching her grow. Little did we know what life held in store for her and what the future would bring.

Addison was born on July 19, 2005. Her birth seemed normal by all accounts. Within just a couple of hours after her birth, though, the doctors and nurses began to realize that something was wrong. Addison was placed into the NICU for the next couple of days. It was shocking and surreal to see this perfect on the outside, beautiful little 8 pound baby girl in the NICU next to all the little preemies. Nothing was making sense. Addison’s little belly swelled as time went on. Tests eventually determined that she had internal bleeding and the swelling in her belly was caused by all the blood she was losing. After 48 hours in the NICU, she was flown by helicopter to Iowa City’s Children’s Hospital. The wonderful doctors and nurses in Iowa City determined that Addison had a Rhabdoid tumor on her kidney that had ruptured. Cancer. The word that turns your world upside down in an instant. Doctors performed surgery but were unable to remove the cancer because it had spread throughout her little body. After 9 short days here on this earth, little Addison Rose Love won her battle with cancer and now rests in the arms of Jesus.

I am so grateful that I was able to spend a little time with Addison before she died. Even though I couldn’t hold her, I touched her, talked to her, kissed her little head, and tried to soothe her and let her know she was loved. She truly touched my heart in a very deep, deep way. To honor her memory, alongside Addison’s parents and siblings, we’ve held our own lemonade stands and fundraisers to help Alex’s Lemonade Stand. (See www.Addisonslove.com for info on what we’ve done). All of the children in this world that ever have to suffer with cancer are heroes. My hope is that one day soon, we’ll find a cure. Way to go Alex’s Lemonade Stand for working tirelessly toward that goal.

Written With Love by Sharie Bergquist (affectionately referred to as Aunt Jelly by Addison’s siblings!)

Donate in Honor of Addison Today!