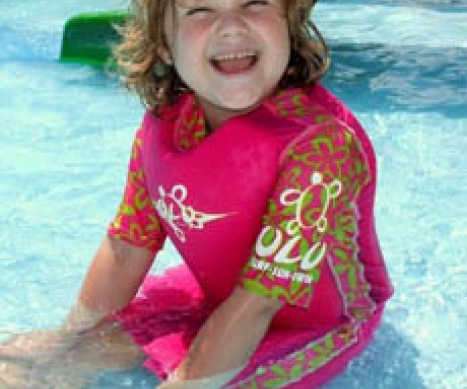 Get the facts about Germ Cell Tumor and how our research projects are making a difference.

Ilaria was diagnosed with yolk sac germ cell cancer in April 2006, three days after her third birthday. The only indication that something was wrong had been a persistent back-ache. A CT scan revealed a fast-growing tumor the size of an adult fist in the center of her chest cavity. It had collapsed her left lung, oppressed her heart, and had dislodged and constricted her trachea. Due to airway complications, even sedation for a CT scan put her life in danger.

She was treated at University Medical Center in Tucson, AZ (a comprehensive cancer center) with four rounds of chemotherapy over a three-month period, followed by major surgery to remove the remainder of her tumor.

Throughout her treatment, Ilaria lost her blonde curly hair and 45% of her hearing due to the chemotherapy, but she never lost her vibrant spirit. It was her indomitable spirit that kept us strong throughout the ordeal.

Ilaria's hair eventually grew back but her hearing loss, unfortunately, is permanent. Ilaria is currently in remission and she's now just on annual check-ups with the oncology team. She continues to live her life to the fullest and is currently a vibrant 12 year old who's dealing with the usual drama of middle school, and living life to the fullest!

She held her first annual tribute lemonade stand in October 2006 to raise money for pediatric cancer research and we plan on continuing to support ALSF for many years to come!

Information provided by the Easom Family 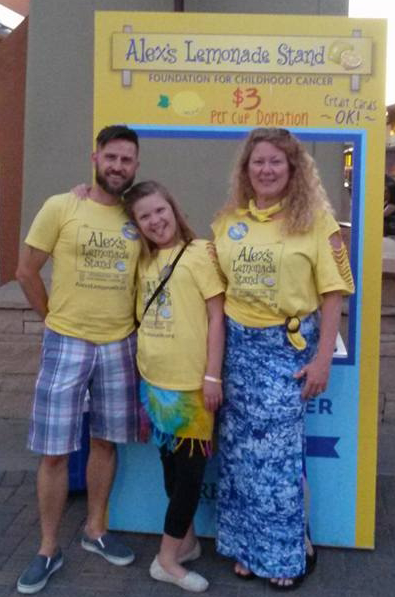 April 9, 2006. That was the day our world fell apart. The day those awful words, "Your daughter has cancer,” were delivered to us.

Our daughter had turned three two days before, and despite her complaining of a backache and a scratchy throat for a couple of weeks, we'd had a great celebratory weekend. We'd been to the pediatrician and urgent care several times with her symptoms, only to be assured that she had pulled a muscle and had seasonal allergies. The day after her birthday party, her symptoms seemed worse and my wife showed up at the pediatrician's office demanding further tests. She collected me from work on the way to get our daughter's blood draw and a chest x-ray. I was there when the radiologist came out, face white as a sheet, and told us to go back to the pediatrician immediately. I was there when the pediatrician looked at the x-ray film and went silent, her face the same color as the radiologist's. I still see those faces three years later.

We were admitted to the local university hospital that night with an emergency CT scan at 2am. The diagnosis came at 7am the next day by a pathology doctor who didn't know the news had not been broken to us yet. "We need to schedule a biopsy of your daughter's tumor." It wasn't her fault that we heard the news so matter of factly, but I'll never forget our reaction; my wife collapsed onto the hospital bed in floods of tears while I had to run to the bathroom to throw up.

Despite the devastating news, we were warmed by the level of support we received from the hospital staff, from our friends and family, and from our local community. My employer instantly granted me as much time off work as I needed without fear of losing my job or salary. As a one-income family (my wife was a stay-at-home mom) that was a blessing in itself. It meant that I didn't have to make the choice of going to work to keep a roof over our heads or spending time with my daughter, whose very life was hanging in the balance. It meant that I was able to stay by her bedside - sleeping in bed snuggled up to her most nights - for each round of chemotherapy and, finally, her surgery.

Our medical teams became our family, and to this day we're still very close to them. One nurse in particular would bring us coffee each morning on her way in to work, fresh fruit from her trees at home, or treats she had made for her family, sit with us and hold our hands when times were tough, laugh and celebrate with us each time we heard good news. We really could not have wished for better medical care.

Our friends and family visited each day, and the fact that my family was back in England didn't stop them calling the hospital each day. It was amazing how a simple phone call delivered so much support and strength even when the person on the other end didn't know what to say to comfort me. Amazing how someone crying with you from across the Atlantic lent support.

My wife's mommy group really stepped up to the plate - literally! They took it upon themselves to bring us lunch for every day that we were in the hospital. They delivered menus to us or offered homemade dishes, told us to pick what we wanted each day, then took turns to deliver it to us - all without ever expecting us to pay them. In fact, most got offended when we did offer to pay for the food!

My daughter's play group sent handmade decorations for her room; posters with her group's hand prints, mobiles to hang from the ceiling...the nurses always laughed when we arrived for a round of chemotherapy. They saw us bringing in Radio Flyer wagons filled to the brim with decorations, pillows, and other things to make the room as comfortable as possible; but that helped our three-year-old settle in and feel as comfortable as possible in such a sterile environment.

There were also the more formalized methods of support - the hospital social workers, local childhood cancer charities, services offering counseling, the child-life specialists at the hospital who specialize in supporting children through their illness through play, helping parents to verbalize diagnosis, prognosis, and treatments to a toddler. The home infusion nurse who taught me how to take care of our daughter's central line - how to line up the syringes of saline flush, medication, dextrose, and heparin, the infusion driver who would deliver her medication and take away our used syringes and needles...the list of those who supported us in one way or another seems endless.

After four rounds of chemotherapy and major surgery, our wonderfully brave and inspiring three-year-old entered remission. That was when the reality hit that we had huge medical bills to pay and that's when our local community stepped in and helped us. We decided to hold a fundraiser - a prize raffle and sponsored walk to raise money for our medical bills. Local business freely donated gift certificates and products as raffle prizes, people we had never met before showed up to walk and raise money for us, checks arrived in the mail, sometimes for $100 or more, from people we had never heard of. By December of 2006, we'd received almost $5,000 in donations toward our medical expenses. We never expected that level of support and we can never say thank you enough times.

Ilaria is now 12 years old and just about to celebrate 9 years in remission.  Her health is good and she's a normal, vibrant, if feisty, pre-teen. To this day, we continue our fundraising efforts but we now donate the money raised to those charities who supported us, to Alex's Lemonade Stand Foundation, and to the pediatric cancer research lab at the local university hospital. The level of support we received opened our eyes to how wonderful people are and we hope to carry that torch with us, bringing its light to others in our situation. Helping ALSF is one small step toward that goal, but it's an important one and we plan on continuing our support for many years to come.

Donate in Honor of Ilaria Today!