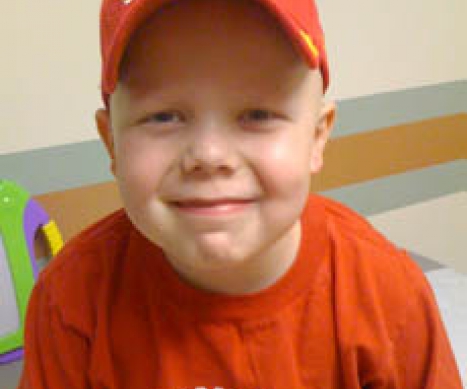 Max has been diagnosed with a Primitive Neuroectodermal Tumor (PNET) of the Central Nervous System (CNS), in other words a malignant brain tumor which has metastasized to his spinal column. This type of cancer is a grade four which means that it is very aggressive and quick growing.

Max's father took Max to the ER at MCMC on March 16, 2009 after he had complained of a headache and backache for most of the weekend. MCMC ran some preliminary tests and decided to send him to DeVos Children's Hospital in Grand Rapids. Max at this point was suffering from brain swelling which impaired motor skills on the right side of his body along with losing his ability to speak. After four days of testing, the doctors told us that Max had cancer (March 19, 2009). They did not know at this time which kind but would continue to do further testing until they pinpointed the cancer so they could start the appropriate treatment.

After numerous tests and a brain biopsy the doctors had ruled that the cancer is the above mentioned.

The support from the school, the community, family and friends has been very welcomed during this time. I am amazed and truly grateful that we live in such a caring community. Every well wish and positive thought keeps us strong as Max fights this battle.

As for Max, he only can grasp as much as a six-year-old can understand. He knows he is sick and is very frustrated that he is unable to do what any typical six-year-old can do. He has his moments of sadness but for the most part we can spark a smile or two from him each day.

The most difficult part of this experience has been not having our family at home together. We also have a nine-year-old daughter and are trying to keep things as "normal" as possible for her. As a nine-year-old, she doesn’t quite grasp the whole concept of Max's illness either.

Max started the first of his treatment on Tuesday (March 31) consisting of high dose chemotherapy and stem cell rescue. If all goes as planned Max will be able to return to school full time by September of 2010. He is currently inpatient undergoing a bone marrow transplant at Devos Children’s Hospital in Grand Rapids, Michigan as of mid-December 2009.

Update: Sadly, Max passed away in November of 2010.