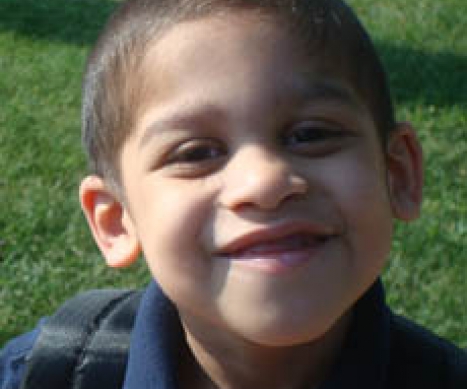 Waseem was a chubby, active toddler (age 3) in the beginning of the summer of 2006.  He had a great appetite and was full of energy.  During the month of August, I (his mother) noticed a change in him.  It all started with a fever that we thought wasn't very serious, so we gave him Motrin and Tylenol, intermittently to treat it because doctors said it was a virus, since his blood cultures were negative for infection.  We were told to give him plenty of fluids and keep on with the Tylenol and Motrin regimen until the virus went away.  It didn't.  We were in and out of ERs' for the whole month trying to get our boy the treatment he needed to make him better.  The fevers got worse and worse and for a time, Waseem didn't want to eat anything.  I remember making him 3 different meals at a time to try to make him eat something.  As a result, he got very weak, and finally, he did not want to walk.  Since he was nonverbal, he couldn't tell me he didn't walk because he was in pain.  I told his doctor all of this, and he saw the dark circles around Waseem's eyes and the new 'bump' on his head that pretty much appeared overnight.  He suggested we go to the nearest hospital because he was ordering a CT scan of the abdomen.  After the CT scan was completed, we were told that a tumor was found above his left kidney, the size of a small orange (6 cm around).  An ambulance was called immediately and Waseem was taken to Riley Children's Hospital in Indianapolis, Indiana.

That night, one of the chief pediatric oncologist was there.  Her name is Dr. Nadine Lee.  She examined Waseem, and told us the news that would change our lives.  The 'bump' on his head, wasn't just a bump...it was a tumor as well.  She said that it was most likely neuroblastoma, but she wouldn't be sure until all of the scans (bone scan, MIBG, and CT, and bone marrow aspiration) were finished.  When they were finished, they revealed 3 tumors on his skull bones, small tumors all over his ribs, small tumors all over his pelvis, and small tumors all over both of his femurs (hence the pain)...and, of course, the main tumor above the left kidney.  The diagnosis:  neuroblastoma stage IV.  A central line was placed in his chest while he was in surgery for the biopsy, and the bone marrow aspiration.  We stayed in the hospital for 2 weeks straight at this point, sorting out his new chemotherapy schedule, and for him to receive his first dose of chemo.

After 6 doses of chemotherapy, 1 stem cell transplant, and 12 rounds of radiation, and 6 months of Accutane, I'm happy to say that Waseem is in remission, thank God.  We only pray that he stays that way.

Donate in Honor of Waseem Today!