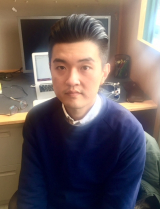 Combination therapies using cytotoxic drugs have revolutionized the treatment of pediatric rhabdomyosarcoma (RMS). However, cure rates have largely remained stagnant since their implementation. We have recently generated an optically-clear, immune-deficient zebrafish that can engraft human RMS tumors, with growth kinetics and histological features similar to those grown in immune-deficient murine models. However, the zebrafish model has additional powerful attributes including high fecundity, low maintenance cost and the ability to assess growth kinetics at single-cell resolution. PARP inhibitors (PARPi) are now used in the clinic for the treatment of triple negative breast cancer and ovarian cancer. More recently, it has been demonstrated that the addition of DNA-damaging agents potentiates PARPi cytotoxicity in a variety of cancer types, including Ewing sarcoma. To date, preclinical modeling of PARPi and DNA-damaging agents has yet to be studied in RMS.

Given that PARPi are now in clinical evaluation in children, are well-known to induce apoptosis in human RMS cell lines and potently synergize with DNA-damaging agents to elevate cancer cell killing in other sarcomas, this project aims to study if the combination of PARPi and DNA-damaging agents will be an effective therapy for pediatric RMS patients.

Chuan Yan, PhD developed a unique zebrafish model that is being used to study a potential treatment for rhabdomyosarcoma.  His research resulted in the publication in the journal Cell.

Dr. Yan and his team at Massachusetts General Hospital used the model to assess two drugs: olaparib and temozolomide. The drugs are currently in trial to treat Ewing sarcoma and have shown promise for treating rhabdomyosarcoma. When used individually, the drugs have limited effectiveness. But when combined in the zebrafish model, the drugs eliminated rhabdomyosarcoma completely.

“The work is particularly exciting for two reasons,” said  David Langenau, PhD, who was the senior author on the study. “First, we identified a potential new therapy for a devastating childhood cancer. Second, we now show that a wide variety of human tumors can grow in immune-deficient zebrafish. The model has the potential to change how we review drugs prior to moving into the clinical setting. It can aide in reducing the cost and time required, allowing rapid assessment of combination therapies, and directly visualizing drug responses at single-cell resolution. The model will be truly transformative for cancer biology.”

The next step is bringing the drugs to the clinical trial phase, with the aim of identifying safer, more effective treatments for children with rhabdomyosarcoma.

Co-funded by:
Flashes of Hope