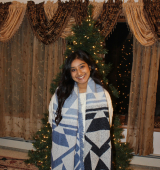 Background
Pediatric brain tumors are the most common cause of cancer-related death in children. Among these, diffuse intrinsic pontine gliomas (DIPGs) are the most lethal. DIPG is a type of brain tumor found in the brainstem, specifically in the pons. Almost all children with DIPG die within 18 months of diagnosis. There are no existing treatments for this type of brain tumor, making diagnosis particularly devastating. Drs. Rameen Beroukhim and Pratiti Bandopadhayay, along with their colleagues at the Dana Farber Cancer Institute, have performed a genomic analysis on a set of DIPG samples. They found that approximately 20% of treatment-naïve DIPG tumor cells possess a PPM1D mutation. This mutation, found in exon 6, results in the over-expression of a truncated form of a protein named WIP1. Although PPM1D mutations have been found in other types of cancer, including endometrial and colon cancers, no studies have looked at the mutation in the context of the brain. It is hypothesized that the PPM1D mutation is an oncogenic driver of DIPG cells. Since the mutation is found in treatment-naïve tumors, it is believed that the PPM1D mutation may drive formation of cancer cells, as well as potentially drive resistance to treatments, such as radiation therapy.

Project Goal
Through this project, we aim to better understand the downstream effects of the PPM1D mutation and how it may be involved in DIPG formation. Ideally, this will lead to the identification of possible therapeutic targets related to the mutation and the pathway it affects. Exploration of the role of PPM1D mutations in DIPG will expand our understanding of this under-researched condition and hopefully lead to future effective treatments.