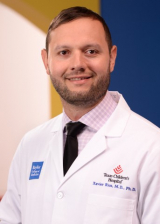 Despite great advances in the care of kids with cancer, it is still the leading cause of death by disease after infancy among children in the United States. In addition, 60% of cancer survivors suffer long-term side effects from their treatment. The main limit of traditional cancer treatments such as radiation and chemotherapy is that they not only kill cancer cells, they also affect healthy ones. A new mode of treatment called Cancer Immunotherapy unleashes the patient’s immune system to only target cancer cells while avoiding healthy ones. One form of immunotherapy uses chimeric antigen receptors (CARs). In this therapy, patients’ own cells are made to create a CAR protein as a weapon to recognize and kill cancer cells. CAR therapy has achieved great success in treating Acute Lymphoblastic Leukemia, the most common childhood cancer. Researchers now look to use CAR therapies for the treatment of other cancers, including neuroblastoma. This is the second most common solid tumor in children, where unfortunately more than 20% die from their disease and a large number of survivors experience many long-term side effects. We are working on improving how we find the best CARs to use against neuroblastoma using a patient’s own NKT cells. Patients that have high levels of these cells within their neuroblastoma tumors do better than those with low levels. We believe these cells have special properties against neuroblastoma when combined with CARs and are currently testing this in a clinical trial.

Project Goal:
To improve the treatment for patients with neuroblastoma, we developed a new way to quickly test much larger numbers of CARs. CARs are currently tested in the lab by building them one at a time using their building blocks, which is time-consuming. Instead, we developed a method where we can mix and match all the building blocks at once so that we can test thousands of CARs at the same time. The fact that we can generate and track so many CARs at once gives us an unprecedented ability to develop new CAR immunotherapies. We will use this method to test thousands of CARs and find which ones are best at killing neuroblastoma cells. In addition to the killing ability of the CARs, we will test their ability to improve NKT cell survival within the hostile environment of the cancer. The best-performing CARs will be selected for additional testing, with the goal of translating one of them into a future clinical trial for patients with neuroblastoma. Because of its flexibility, we expect this novel approach will allow us to develop better CAR treatments for other pediatric cancers as beyond neuroblastoma.