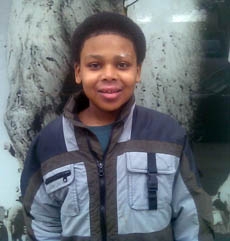 Isaiah has always been an active kid.   Like many boys, he has always loved being outside, riding his bike and playing sports--especially basketball and football.

On July 16, 2009--his 10th birthday--Isaiah awoke to terrible pain in his knees.  We went ahead with his flag football party in the park, as planned.  Despite his pain, Isaiah played well.   We had a lot of fun with Isaiah and his friends.  I took Isaiah to the doctor the next day or so.  The doctor told us not to worry; that it was probably just growing pains, and Isaiah should just take Ibuprofen or some other inflammatory for the pain.  This went on for a couple of months.  Isaiah joined a football league and began playing tackle football.  He loved it, but he kept complaining about the pain in his knees.  I took him to the doctor about 3 or 4 times.  They all told me not to worry; it was just growing pains.

On Saturday, September 12, 2009, Isaiah played his first tackle football game.  He did a great job blocking, and was really excited to play the next game.  However, the following Monday, Isaiah developed a high fever with no other symptoms.  I took him to his pediatrician.  I told the clinic that we were not leaving until they took a blood test.  We wanted to know, once and for all, what was wrong with Isaiah.  The next day, Isaiah was diagnosed with acute lymphoblastic leukemia, or ALL for short.  Doernbecher Children's Hospital admitted Isaiah as a patient, and he immediately began chemotherapy treatment.

In October 2009, we found out that in addition to ALL, Isaiah also has a rare blood condition called hypodiploidy.  Usually children with leukemia respond well to chemotherapy to reach remission status, but the doctors said that Isaiah could not be treated with chemo alone because of his hypdiploidy.  The doctors stated that the only way Isaiah could live would be if he received either a successful bone marrow transplant or a successful stem cell transplant.  They recommended a stem cell transplant because of Isaiah's age and size.  We knew it would be hard to find a match because of Isaiah's racial background.  On top of that, the doctors said that there was only about a 30% chance that the transplant would be successful.

It took a while to find a match, but thankfully, right before Thanksgiving 2009, we found out that we had a match from the Be the Match national bone marrow registry (www.marrow.org).  That was the best Thanksgiving ever!

On December 28, 2009, Isaiah received an umbilical cord stem cell transplant.  Isaiah remained in the hospital off and on until February 2010.  He had to have 13 blood transfusions, and underwent chemo and radiation prior to his transplant.  Throughout his whole ordeal, Isaiah stayed strong and confident.  I told Isaiah that he was my little Superman, because he is "strong as steel."  Isaiah never gave up hope that his condition would improve.

Our living arrangements abruptly changed and we had to move while Isaiah was still recuperating in the hospital.  We decided to relocate closer to the hospital, since Isaiah would still have to be seen regularly for treatment post-transplant.  Alex's Lemonade Stand Foundation provided us with temporary lodging at a hotel for a little over a week so we could have a place to stay for the time being.

It has taken Isaiah awhile to get back to normal, but now that we are over two (2) years post-transplant, I am happy to say that Isaiah is doing very well.  He has been in remission status since his transplant, and is back to school full-time.  More importantly to Isaiah, he gets to ride his bike, play basketball and play football, just like he did before his diagnosis.  Isaiah truly is my Superman!

Noah is normally a quiet person who doesn't enjoy a lot of attention from others... except when he's onstage. Between rehearsals for show choir, Noah was found sleeping, coughing and feeling feverish. Then an X-ray revealed a mass in his chest.
Read more »