Scarlet Craig is a happy little girl, who loves to sing everything she does like she is living in a musical. She loves school and thrives with many activities and projects going on at once. Scarlet also has a goofball streak—but you only see it after she knows you really well.

Scarlet is also battling Stage IV neuroblastoma, the most common extracranial solid cancer in children often found in the adrenal glands, but can also develop in the nerve tissue of the neck, chest, abdomen, or pelvis. Treatment for Stage IV neuroblastoma has taken Scarlet and her family across the country traveling from her home in Oregon to New York City and also to San Francisco for a cure.

Scarlet was diagnosed with neuroblastoma when she was 4 years old in July 2014, after two months of doctor visits for fevers and leg pain. She had always been extremely healthy and never had to take any medications, not even over-the-counter medications for fevers.

In May 2014, Scarlet’s symptoms began with leg pain and a fever. The emergency room doctor did not order a leg x-ray and by the next day, Scarlet’s pain and fever were both gone. Her blood work came back normal. However, the fevers continued on and off and then her leg pain returned. Scarlet ended up in a specialist’s office and an immediate leg x-ray which revealed a lesion. A subsequent MRI and other tests confirmed Scarlet’s diagnosis of neuroblastoma. Scarlet’s family was unfamiliar with doctors and hospitals—that was about to change.

Scarlet had a large tumor in her abdomen that originated in her adrenal gland and spread around multiple blood vessels and onto her liver. The cancer had also metastasized to her bones with lesions on her right pelvis, femur and portions of her spine. Scarlet followed the COG protocol for neuroblastoma in Portland, Oregon at Doernbecher Children’s Hospital. Five rounds of high-dose chemotherapy was used to shrink the tumor, so it could be removed surgically. The surgeons were able to remove 95% of the tumor and one adrenal gland. Scarlet was lucky to not lose a kidney in the process.

After surgery, Scarlet was slated to begin very high dose chemotherapy that requires a stem cell transplant. While preparing for this protocol, tests revealed the disease was not in her bone marrow and Scarlet no longer qualified for that treatment protocol. The family then traveled to San Francisco for MIBG treatment. During this treatment Scarlet, who was just 5 years old, had to be in a room alone for 5 days. Scarlet did amazing and never complained!

After this treatment, her family made the difficult decision to travel over 2,000 miles to Memorial Sloan Kettering Cancer Center (MSKCC) in New York to continue on the protocol. At MSKCC, Scarlet had another round of high dose chemo. Five rounds of 3f8 antibody and also received 10 rounds of radiation. She has one more cycle of oral chemotherapy. If her January 2016 scans are clear of disease, Scarlet will be officially in remission and qualify for a clinical trial at MSKCC to prevent relapse.

Scarlet’s travel to and from MSKCC was covered partially by the ALSF Travel For Care Program. In total the family made five trips to and from New York; and they have at least eight more trips planned for 2016.

At the beginning of Scarlet’s treatment she would cry each time a new person walked in—now, Scarlet is a pro and thinks nothing of doctors and nurses examining her. Her mom, Elena, says Scarlet sees the best in her life. She asks about her cancer and her treatment, but she insists it does not hurt, even when it is obvious it does. Scarlet never lets her cancer slow her down. 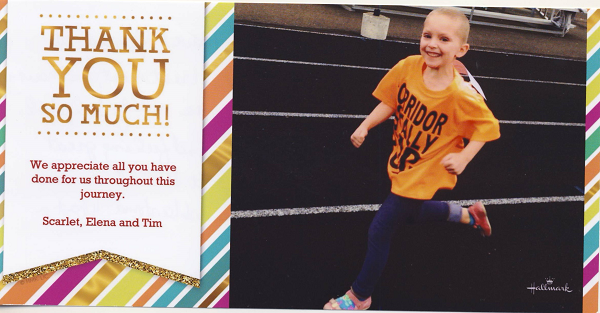 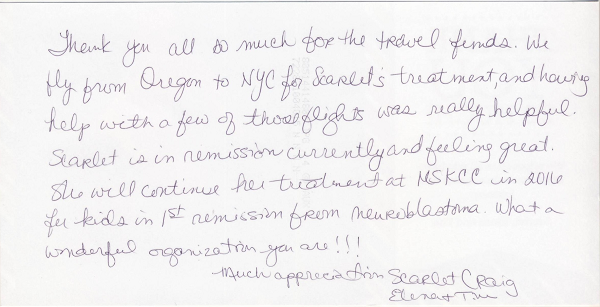