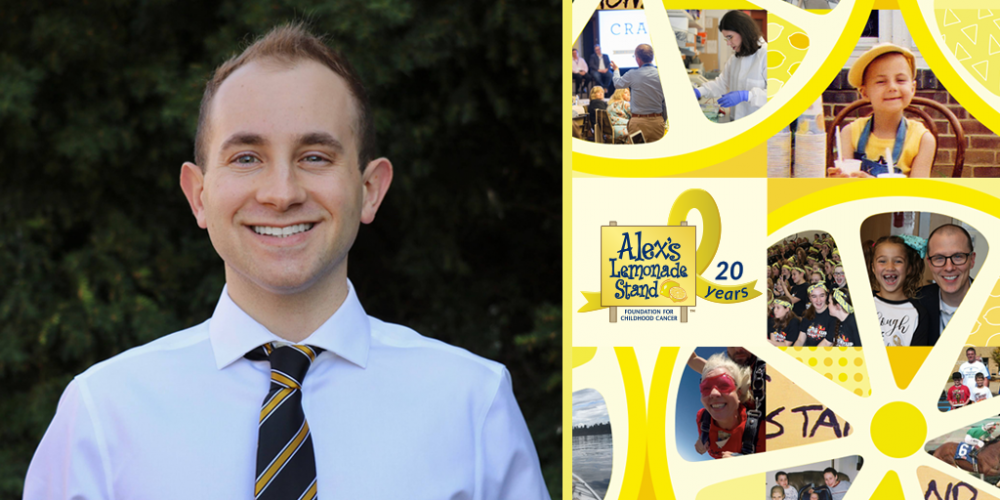 The year was 1998. In the city of Blue Springs, Missouri, life continued as normal, except for one family: the Mozers, who were processing the fact that their 16-month-old son, Jacob, had been diagnosed with stage IV neuroblastoma.

For the next three years, the Mozers became a childhood cancer family. Even after Jacob was declared NED (No Evidence of Disease), Jacob’s battle was as difficult to forget as it was to fight. But the Mozers decided to focus on the sweet instead of the sour.

“We wanted to do something to help other kids and families who had to deal with childhood cancer,” parents, Mark and Cheryl Mozer resolved. As a pediatrician and pharmacist working as a medical writer, they started directing others to the best medical care available. But they couldn’t help feeling like there was more they could do.

Looking back at a neuroblastoma email list they’d joined during Jacob’s diagnosis, they saw a post about a young girl named Alex Scott who wanted to raise $1 million for pediatric cancer with her lemonade stands that summer.

Sell lemonade? They could do that.

They could also teach their two boys about charity in the process. When they held their first lemonade stand at their local Hy-Vee grocery store, they realized that to make it as successful as possible, they’d need to teach the public about pediatric cancer as well.

Alex’s story was becoming a national phenomenon at the time, so getting the word out wasn’t difficult – their stand announcement was picked up by local newspapers, TV stations and radio shows. The boys’ schools allowed them to hang up fliers. People drove for miles just to put their donations in cancer survivor Jacob’s hands. The year was 2004, and the Mozers had raised $5,000, but more importantly, they’d caught the “bug” to keep going.

Things accelerated quickly after that. The marketing manager of Hy-Vee for the entire Kansas City area agreed to let the Mozers host stands in all 20 of their stores. The Mozers worked hard to recruit enough volunteers through meetings, posters and reaching out to friends. Hy-Vee brought in 7-UP/Country Time to sponsor the campaign, provide lemonade and donate $10,000. Then Alex Gordon of the Kansas City Royals became a celebrity sponsor. The year was 2007, and Alex’s Lemonade Stand Foundation was a household name in the Kansas City area, now raising $100,000 annually for pediatric cancer research.

Before the Mozers knew it, they were running an empire of lemonade stands. “This would not have even been possible without the great volunteers that we not only recruited, but who came back year after year to help us,” the Mozers said.

However, it was also becoming tough to organize for two people with full-time jobs. They decided 2009 would be their last year leading the event, but it wasn’t going to end there.

Mark and Cheryl remained as consultants, but their super volunteers, Mark and Paige Walsh, who took on the hardest job of coordinating, finding and training Team Leaders to run each of the Hy-Vee stands, knew just the right local person to take over: Mark’s sister Susan Blowey. Motivated by the cancer battle her nephew, Charlie, was facing, Susan rolled up her sleeves and expanded the rebranded Midwest Lemonade Days as part of ALSF.

But she wasn’t working alone. Despite being 4 years old when his brother, Jacob, was diagnosed, SuperSib Nick was aware of the effect that childhood cancer had on a family. “When Susan took over the stands, he did not want to give up his charitable work even though we were cutting back,” Mark and Cheryl said. Nick became Susan’s “behind the scenes” person, furthering awareness of pediatric cancer in the community.

The year is 2020, and, true to his medical family roots, Jacob has begun pharmacy school. Nick is still chipping in handling financial statistics for Midwest Lemonade Days. Mark and Cheryl have passed down their original Blue Springs stand to another local childhood cancer family, the Grays. Midwest Lemonade Days has raised more than $1.5 million for pediatric cancer research.

“It is amazing to us how something that started out so small has grown so big,” the Mozers reflected.

They still believe this is how a cure can be found. Through passionate but hard work, advocacy and education, a little lemonade stand can go a long way.