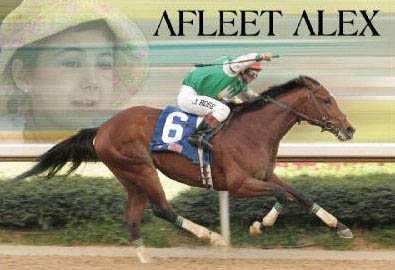 Afleet Alex, who ran in all the Triple Crown races in 2005 and won the Preakness after a dramatic stumble, was one of ALSF's earliest "celebrity" supporters.The support of his owners was a turning point for the Foundation. After Alex passed away in 2004, Alex's parents, Liz and Jay Scott, weren't sure how to go on without her. As Jay Scott wrote in a recent Huffington Post piece:

Alex truly was the wind in our sails, the gas in our engines, and when she died, the fate of her dream to find cures through those lemonade stands hung in the balance. I am not one to believe in signs, or that things are meant to be, but shortly after Alex's death, we received a phone call that may very well have laid the groundwork for what would become Alex's Lemonade Stand Foundation -- the continuation of our daughter's legacy to find cures for all kids with cancer.

I can remember when the phone call came in, my wife Liz took the call, and the person on the other line said simply:

"We own a horse that is pretty good, and we have been donating anonymously to Alex's cause whenever the horse wins. Would it be okay if we kept donating, but go public with it?"

Afleet Alex's owners had been modest when they said their horse was "pretty good." Their horse was invited to the Kentucky Derby in 2005 and the Scotts were invited to set up a lemonade stand there. "Just like that, Alex's Lemonade Stand Foundation (ALSF) was on the world's stage." Afleet Alex and jockey Jeremy Rose stumbled on the final turn of the Preakness, miraculously Afleet Alex was able to regain his footing and go on to win exemplifying the true determination of a champion – getting back up and fighting, no matter what challenges lay ahead. This spirit has continued to be a core part of Alex's Lemonade Stand Foundation.

Watch Afleet Alex in the Preakness in 2005:

Ten years later, reflecting back on Afleet Alex and the national prominence ALSF gained because of the horse and his owners, it's hard to overstate how important it was to the Foundation. Afleet Alex's story will be highlighted during this year's Preakness coverage, with Josh Elliott interviewing Liz and Jay Scott. Tune in to Preakness coverage on NBC on Saturday, May 16 to watch.

[Afleet Alex's] place in horse racing lore was established at that year's Preakness. After another horse veered into his path, their heels clipped, and Afleet Alex dropped almost to his knees, his nose inches from the dirt, his jockey, Jeremy Rose, barely hanging on. It was a feat of athleticism for both horse and jockey. Instead of going down, Afleet Alex regained his footing and roared off to a 43/4-length victory. "He did something champions do," Rose said after the race.

"I've seen horses take bad steps in races and win," said Ritchey, the trainer. "I never saw horses stumble that much and come back on and win in a Grade I race like this. That's the first I've ever seen it."

In honor of the 10-year anniversary of Afleet Alex's Preakness win, donate or host a lemonade stand during Lemonade Days!