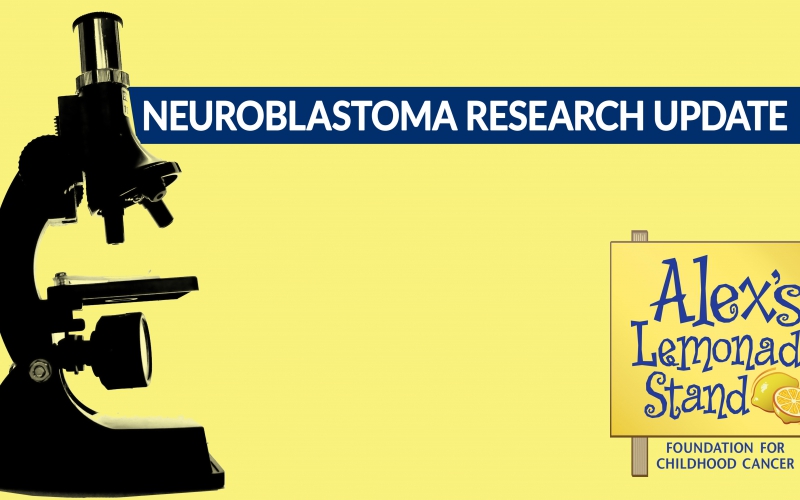 Neuroblastoma, the type of cancer our founder Alex Scott battled, is the most-common extra-cranial solid tumor in childhood. Alex’s Lemonade Stand Foundation (ALSF) has helped power research that is getting us closer to cures every day. Researchers like Dr. John Maris from the Children’s Hospital of Philadelphia (CHOP) and Dr. Katherine Matthay from the University of California San Francisco School of Medicine, who sit on the ALSF Scientific Advisory Board, are working to study what makes neuroblastoma tick — to find its Achilles heel and then go after it.

“Your child has neuroblastoma.”

Thirty years ago, those four words came with dismal survival rates (only 10-30%). Thanks to intense research and scientific collaboration, long-term survival rates have increased to 50-60%  for children diagnosed over the age of 18 months.

However, survival rates do not tell the whole story. Stage of disease, age at diagnosis and several other factors can affect outcome. In addition, some current treatments can leave children with long-term side effects impacting their quality of life and the long-term health of survivors.

There is still more work to be done. ALSF-funded researchers are working to better understand neuroblastoma and learn its true Achilles heel — the very thing that cause and power the disease, so doctors can stop it.

Ten years ago, the standard of care included surgery, chemotherapy, stem cell rescue, radiation and Accutane at the end of therapy to prevent relapse. Five years ago, the standard of care changed only by increasing the intensity of these treatments. Fast forward to today, and treatment is becoming more targeted with the inclusion of immunotherapy for high-risk neuroblastoma once the disease is in remission.

Immunotherapy brings the most promise for cures. Dr. John Maris, an oncologist from the Children’s Hospital of Philadelphia (CHOP) and a member of the ALSF Scientific Advisory Board says the current immunotherapy protocols prove it can work, but there is more to be done to improve effectiveness and decrease side effects, which can range from flu-like symptoms to severe pain throughout the body.

Research, says Dr. Maris is now focusing itself on finding the Achilles heel of neuroblastoma.

“We are working to figure out the genetics of why neuroblastoma happens. And then we ask the question: once it arises why do some become more malignant?” said Dr. Maris.

The current research builds on past discoveries and breakthroughs, such as the discovery of the MYCN amplification, which occurs in lower risk neuroblastoma. Dr. Katherine Matthay, from the University of California San Francisco School of Medicine and member of the ALSF Scientific Advisory Board, explained that this discovery has enabled children battling lower risk neuroblastoma to avoid intense treatments with severe side effects, while still realizing a 95-percent long term survival rate. This same discovery has also allowed doctors to intensify treatments for high-risk neuroblastoma.

The discovery of ALK-gene driven neuroblastoma has also led to cures for some patients who are given ALK inhibitors.

Dr. Matthay says efforts are ongoing in the U.S. and Europe to further improve immunotherapy with CAR-T cell, vaccine or natural cell therapy.

Dr. Maris says that more hope lies in continuing to sequence the neuroblastoma genome, studying and finding all the genetic mutations and using this information to create personalized treatment approaches.

“We have several important new clues to personalized treatment approaches being tested in the clinic through some of the projects that ALSF funds,” said Dr. Maris

Since 2005, ALSF has funded over 690 multi-year research grants in the U.S. and Canada. Learn more about ALSF funded research, including the breakthrough ALK-gene therapy that saved Edie Geiger’s life here.

END_OF_DOCUMENT_TOKEN_TO_BE_REPLACED

Strong doesn't even begin to define Jake. He's fought ependymoma since 2012, facing several complications and obstacles along the way. Luckily, Jake qualified for a clinical trial that helped keep his cancer stable for a while. Today he is still fighting.
Read more »