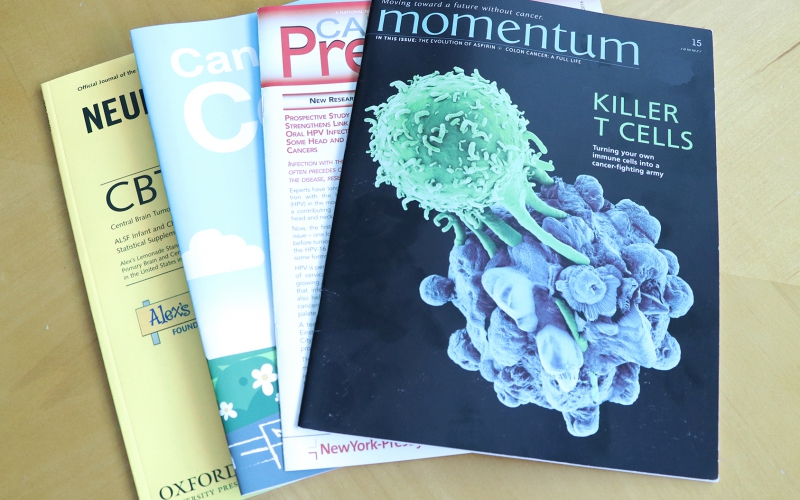 For childhood cancer researchers, publishing in a scientific journal is not just about the prestige and accomplishment. Publishing is one of the key ways scientists can collaborate and move closer to breakthroughs and cures for children.

“The purpose of research is the generation of new knowledge. If research is kept private and placed in a drawer then it is useless,” said Dr. Adolfo Ferrando of Columbia University, who published his research about a mutation that drives the relapse of acute lymphoblastic leukemia (ALL) in the January 2018 edition of Nature. “By publishing, we give the clinical community the opportunity to use the published knowledge.”

Published research can also foster new research projects by inspiring new ways of looking at the same problem or influence studies across disciplines. Publication also gets scientists talking and offering meaningful feedback that can make the next phase of research even better and more effective.

ALSF has been credited in hundreds of published articles since funding that first research grant in 2005. Now 800 research grants later, the Foundation funding even more cutting-edge science and fostering collaboration between researchers.

Researchers often publish when they’ve made a breakthrough—one that could spur more breakthroughs for childhood cancer researchers everywhere. Here are three ALSF researchers who made and published landmark discoveries this year:

After Dr. Ferrando identified a mutation prevalent in some types of hard-to-treat leukemia, he wanted to push his research farther and prove that the mutation was the very thing that drove children to relapse with the disease. Using funding through the ALSF Innovation Grant program, Dr. Ferrando was able to fully study the mutation, called NT5C2, and make a critical discovery: chemotherapy, which typically pushes a child with acute lymphoblastic leukemia (ALL) into remission, was actually promoting cancer cell growth in leukemia with this type of mutation.

Essentially, the treatment for some children was the cause for others.

The implications are both short and long-term. In the short-term, children battling ALL could be tested and monitored for NT5C2. This would allow doctors to predict the likelihood of relapse and make treatment decisions that were more likely to lead to remission. In the long-term, scientists can use this information to test drugs that could inhibit NT5C2 and stop it from powering leukemia cell growth.

Dr. DuBois, who works on the Dana-Farber team funded through the ALSF Center of Excellence Grant program, led a clinical trial testing the safety and effectiveness of larotrectinib, a drug that showed effectiveness in the inhibition of a protein that drives the development of certain rare childhood and adult cancers, including infantile fibrosarcoma, a rare type of soft tissue cancer.

The results of his study were astounding: over 75% of patients treated with larotectinib responded positively to the drug and their tumors either disappeared or shrunk. His research, published in The New England Journal of Medicine in February, shares critical details of his work and gives other clinicians additional treatment options for their patients battling cancer.

“Our goal is to make discoveries and disseminate these discoveries, especially when there is a therapy with such a high response rate and tolerability,” said Dr. DuBois.

Dr. Jonas, an engineer, oncologist and scientist, created a potentially time-saving and cost-efficient way to deliver childhood cancer treatments using nanotechnology. Nanotechnology refers to working with materials that are on the scale of a nanometer, which is the thickness of a piece of human hair sliced down 100,000 times.

He and his interdisciplinary group of chemists, engineers, and physician-scientists are building nanorobotic, gene-delivery drones to deploy genes and gene-editing packages directly to cells quickly, safely and for a lower cost than current delivery methods. Dr. Jonas published the results of his research in the March 2018 edition of ACS Nano.

For kids battling cancer, this “tiny” technology has the potential to significantly reduce the wait time for delivery of precision medicine, like CAR T-immunotherapy.

“The opportunity to continue to explore 'outside the box' ideas like this and move toward defeating childhood cancer once and for all with emerging cellular therapies has added so much to my pediatric oncology fellowship training and informed the next stage of my academic career and research,” said Dr. Jonas.