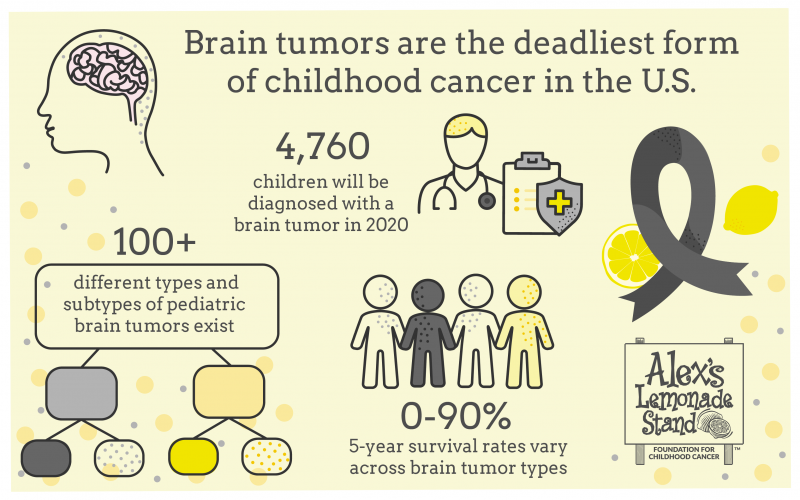 During May, we honor Brain Tumor Awareness Month, to raise awareness of childhood brain tumors and the significant need for more research that will lead to new, safer cures.

Brain and Central Nervous System (CNS) tumors are the leading cause of death for children with cancer in the United States, overtaking childhood leukemia in 2016. While leukemia has seen an increase in survival rates over the last several decades due to improved treatments, brain tumors lag behind with fewer innovative treatments.

Decades have gone by without changes in treatment plans or outcomes in some childhood cancers. For example, there is no cure for a child diagnosed with the brain cancer diffuse intrinsic pontine glioma (DIPG) today. Children diagnosed with DIPG have a median survival of nine months, and less than 10% of children survive two years.

In total, 4,760 children ages 0-19 are estimated to receive a brain/CNS tumor diagnosis this year. These children deserve a better and safer cure.

Alex’s Lemonade Stand Foundation (ALSF) is the only childhood cancer research organization that has been given the National Cancer Institute (NCI) peer-reviewed funder designation for rigorous selection of research grants. We know that we are funding the most impactful brain tumor research possible because of how thoroughly the science is vetted prior to awarding funding.

Here are three exciting and recent ALSF-funded brain tumor research impact stories to illustrate how ALSF is moving the needle toward better and safer cures for children with brain tumors:

To reduce full body toxicity of chemotherapy, scientists are aiming to make treatments more targeted so that they kill cancer cells preferentially over normal cells. In August 2019, the FDA approved a targeted therapy, entrectinib, for use in children ages 12 and older whose cancers have an NTRK1/2/3, ROS1 or ALK gene fusion. This is a new way of treating kids with cancer: the treatment is based on a specific mutation, rather than the type of cancer they have.

While some drugs aren’t able to penetrate the blood-brain barrier, entrectinib is able to do so, bringing a promising new treatment to children with brain/CNS tumors harboring one of the targeted mutations.

Entrectinib was initially studied in Phase I clinical trials at the four ALSF-funded Center of Excellence institutions--Children’s Hospital of Philadelphia (CHOP), Dana-Farber Cancer Institute, University of California, San Francisco and Baylor College of Medicine. The ALSF Center of Excellence (COE) program provides funds to support the development and launch of pediatric clinical trials while training the next generation of leaders in preclinical and clinical drug development.

Learn more about the entrectinib Phase I clinical trial in the publication, “Entrectinib in patients with advanced or metastatic NTRK fusion-positive solid tumours: integrated analysis of three phase 1-2 trials”.

Childhood high-grade gliomas such as diffuse midline gliomas (DMGs) are aggressive and have a devastating prognosis. These gliomas are typically found in the midline structures of the brain, such as the thalamus, brainstem, and spinal cord, and they are most often caused by a modification to a histone, which is a protein complex upon which DNA wraps in order to be packaged into the nucleus. The mutation is called “H3K27M” and while DMGs arising in different locations of the central nervous system are clinically distinct, they share this common mutation, suggesting that promising therapies may be suitable for all H3K27M-mutant gliomas regardless of their location.

Because of their sensitive locations, DMGs are hard to remove surgically and often radiation is the only treatment. Children with these tumors urgently need more therapeutic options.

Dr. Michelle Monje, MD/PhD, is a 2011 ALSF ‘A’ Awardee and 2016 Innovation Awardee and high-grade glioma expert. Her recent Innovation Award established a patient-derived pediatric H3K27M-mutant spinal cord glioma model, which has been a previous limitation in being able to successfully study this disease. Having a dependable model system for the disease allowed her team to bring forward promising lead drug candidates studied in DMGs of the brain to those of the spinal cord. They found that pediatric spinal cord DMG responded similarly to the experimental therapies as did DMGs of the brain.

They studied two therapeutic approaches: a GD2-targeted CAR T cell therapy and a combination drug therapy of panobinostat and marizomib. Both therapies extended survival in their pediatric spinal cord glioma model system which has led to the initiation of two new clinical trials to study these encouraging new therapies in H3K27M-mutant gliomas.

3. Targeting the Genes that Drive Ependymoma

In 2016, the World Health Organization added molecular characteristics to the classification of brain tumors, which, alongside histology, provides a richer description of tumor diagnosis. As part of this reclassification, RELA fusion-positive ependymoma was added as a new entity, in company with ependymoma and anaplastic ependymoma. This distinction suggests that therapies that work for one subtype of ependymoma might not work for another and provides strong impetus for research into the biological underpinnings of the various subtypes.

RELA fusion-positive ependymoma carries a poor prognosis, and ependymomas, in general, are resistant to chemotherapy. Despite understanding that RELA gene fusions drive the development of ependymoma, molecular targets remain elusive, and new therapies are critically needed.

Dr. Stephen Mack, PhD, a 2016 ALSF Young Investigator and 2018 ALSF ‘A’ Awardee, is doing just that. His lab studies the C11ORF95-RELA gene fusion that is the most recurrent driver in ependymoma located in the supratentorial region of the brain, with over 70% of this ependymoma subtype carrying a RELA gene fusion. Dr. Mack’s team has discovered genes that RELA fusion-positive ependymomas are dependent upon, which may provide new therapeutic targets. They will work to validate these targets, in addition to learning more about the underlying biology of these tumors, providing insight into future therapeutic strategies.

END_OF_DOCUMENT_TOKEN_TO_BE_REPLACED

Yash was almost unable to pursue his passions when, at 4 years old, he had symptoms of rectal bleeding. It was a long road ahead to discover he had colonic polyps and a predisposition syndrome called CMMRD. Yash has fought multiple cancers in his life.
Read more »