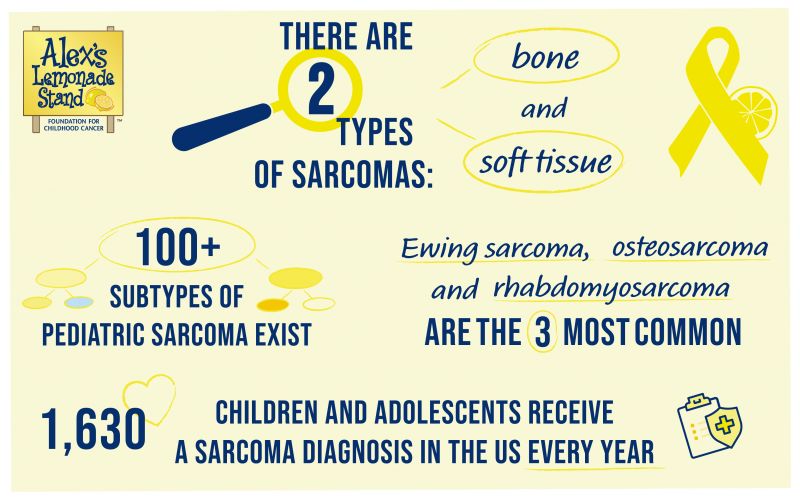 Sarcomas are found in the bones and soft tissues of the body, and they make up about 15% of all childhood cancer diagnoses. But every sarcoma is not the same. There are over 100 different subtypes, including rhabdomyosarcoma, osteosarcoma and Ewing sarcoma. These types of pediatric sarcomas have five-year survival rates that range from 65-69%, and relapsed and metastatic sarcomas have an even poorer prognosis.

Pediatric synovial sarcoma is a rare, soft tissue sarcoma that affects both children and adults and has a poor prognosis for those with recurrent or metastatic disease. Chemotherapies are not nearly effective as they need to be in this disease, and better therapies are desperately needed.

Because of the importance of sarcoma research, Alex’s Lemonade Stand Foundation (ALSF) launched the Crazy 8 Initiative in 2018 to empower collaborative research teams to tackle some of the most pressing problems in childhood cancer research today. Two of the eight areas of emphasis for this initiative are pediatric fusion-positive and fusion-negative sarcomas. Individual awards up to five million dollars will be awarded in 2021. ALSF also funds pediatric sarcoma research through a variety of grant programs including the Young Investigator and ‘A’ Award programs.

Understanding the drivers of synovial sarcoma

Dr. Cigall Kadoch, PhD, a 2013 ALSF Young Investigator and 2017 ALSF ‘A’ Awardee, is leading the way toward a greater understanding of how the SS18-SSX fusion protein directs the development of synovial sarcoma.

Synovial sarcoma is driven by a fusion oncoprotein, SS18-SSX, where the gene SS18 fuses in part to another gene SSX. This mutant protein competes with wild-type (“normal”) SS18 to bind to the SS18 pocket of the SWI/SNF chromatin remodeling complex. After SS18-SSX binds, the tumor suppressor BAF47 is ejected from the complex, starting a deregulated transcriptional program that results in incorrect gene activation. Importantly, this process is reversible: removal of SS18-SSX from the complex restores wild-type SS18 and halts the proliferation of synovial sarcoma cells.

She and her team have recently shown that the loss of BAF47 is not a primary driver of synovial sarcoma and are starting to map the areas with which the SS18-SSX fusion protein, and specifically the SSX tail, interact.

Understanding this fusion protein on the molecular level could give researchers greater insight into potential targets and therapies for children with synovial sarcoma.

Even though it’s known that the SS18-SSX oncoprotein promotes the formation of synovial sarcoma, so far it has proven to be an intractable target. Many other fusion proteins, such as EWS-FL1 in Ewing sarcoma, are also impossible to target.

With a 2017 ALSF Innovation Award, Dr. Scott Armstrong, MD/PhD and team discovered a new synovial sarcoma target, called BRD9 and designed a degrader to completely break it down, suggesting the potential utility of this route as a new treatment modality.

After degrading BRD9, the synovial sarcoma cells progressively died. They also tested their degrader in a mouse model of synovial sarcoma which led to an inhibition of tumor progression, and no obvious side effects of this new treatment were noted.

The team is currently screening for combination therapies that may lead to a more successful translation to the clinic.