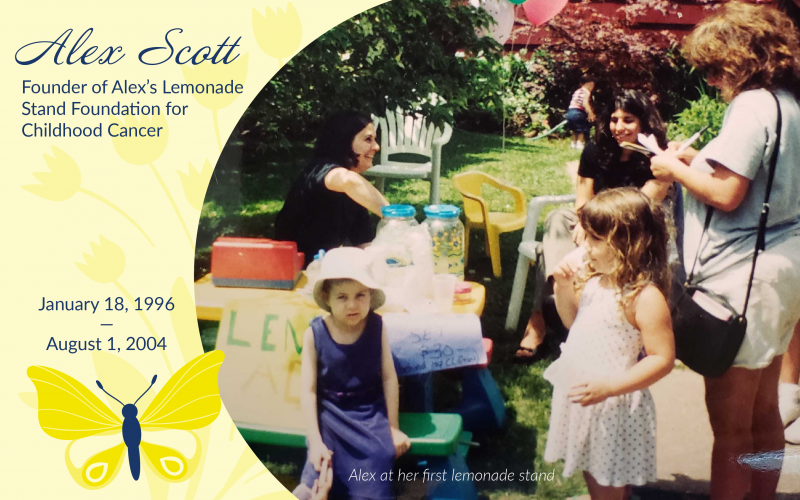 Our daughter Alex had a rare cancer with neuroblastoma — not one in a million — but pretty rare. And she was a young trailblazer, who at the age of 4, ignited a movement to cure childhood cancer with lemonade stands. As her mother, I know that knowing Alex was a once in a lifetime gift, and sadly her lifetime was cut short. Alex was just 8 years old when she died.

We all miss her every moment.

Alex hosted her very first lemonade stand in 2000. I expected nothing much to come of it. I always say, I thought it was “cute,” and I really did. Alex was cute — her stand was cute, and her little girl-ness was so cute. But behind that was a rare focus. Alex wanted one thing: for other kids to feel better.

Alex spent all but a few months of her life fighting to feel better. She knew that other kids were doing the same. That was the other rare thing about Alex, her empathy. She had the incredible ability to understand that she was not the only child battling cancer, but that she was one of many.

When I suggested we donate the money she raised to neuroblastoma research, she told me that would be selfish.

And one of the founding principles of Alex’s Lemonade Stand Foundation was born: all children need cures. And all childhood cancer research is critical.

Alex’s first lemonade stand was rare, but 20 years later, the lemonade stand is far from rare. Thousands of regular people — kids like Alex, families like ours, businesses everywhere — host lemonade stands during Lemonade Days. Typically held in June, but moved to this August because of the COVID-19 pandemic, Lemonade Days is truly the celebration of everything Alex taught us: everyone can make a difference, all donations — big and small — add up, no one is too young or too old — we are all in this together and things that seem rare, really are not all that rare after all.

In July, I hosted a lemonade stand in our front yard. I did not serve lemonade (I just gave out to-go packets) and only had a visitor or two at a time, which I worried would put a damper on the day. But, as the day went on and I stood there in the very spot that Alex held her stand, I realized that it is not about the lemonade, or about the lemonade stand or having everything be “normal” as I would have hoped. Seeing old and new friends who came out to my stand reminded me that, despite the once-in-a-lifetime challenges this year brings, Alex’s story endures and inspires through it all. It is about doing our best to make a difference, even in hard times.

Today and every day in every moment, we wish Alex was here. It seems impossible that she is not. But it seems possible that because of Alex, we will find cures — and we will find them one (virtual, social distanced, or drive by) lemonade stand at a time.

To our daughter Alex, thank you for rarity. We miss you. We love you. We are proud of you.

donate in memory of alex