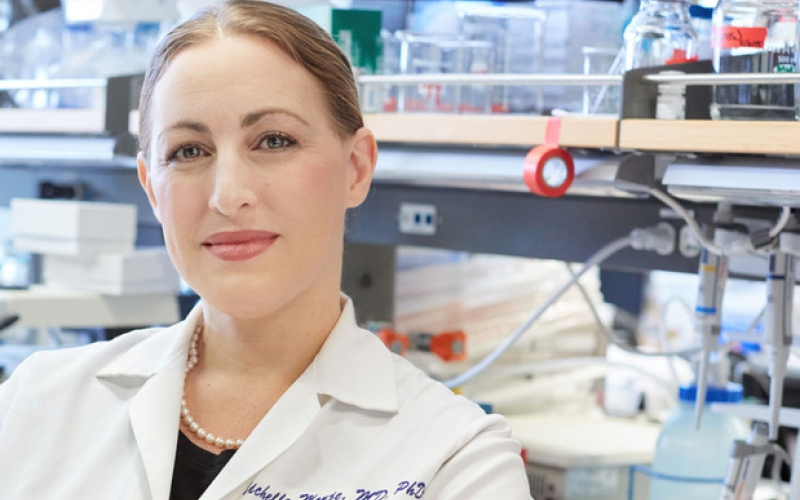 As a young trainee, many people gave Dr. Michelle Monje, Alex’s Lemonade Stand Foundation (ALSF) grantee from Stanford University the (unsolicited) advice that one cannot have a big career in medicine or science and also have children.

She ignored the advice.

Dr. Monje is also studying CAR T cell immunotherapy for diffuse intrinsic pontine glioma (DIPG) in a Phase 1 clinical trial. DIPG is a pediatric brain tumor with a zero-percent cure rate. The trial is still in its early stages; but there have been early wins for some patients enrolled on the trial.

Her very first research grant was from ALSF in 2011 — an ‘A’ Award grant to further the modeling of DIPG. Following that grant, Dr. Monje continued her work studying other high-grade gliomas was funded through the ALSF Innovation Grant program, which is designed to provide critical and significant seed funding for experienced investigators with a novel and promising approach to finding causes and cures for childhood cancer.

Dr. Monje also received a Crazy 8 Pilot grant to further study high-grade gliomas. And then last year, she was named a Howard Hughes Medical Institute (HHMI) Investigator, along with another ALSF researcher Cigall Kadoch, PhD. Dr. Monje will use this investigatorship to study the interactions between aggressive brain cancers, like glioma and the nervous system’s circuity.

This honor also puts childhood cancer on the main stage in the scientific community, as Dr. Monje and Dr. Kadoch are the only two investigators in the group 250 awardees who are intensely focused on the biology of childhood cancer.

During a Twitter Spaces interview in February, Dr. Monje talked about balancing her research with parenthood. She credits her success navigating male-dominated science and motherhood with asking for what she needed — time and space to pump milk at work or meeting times that did not conflict with daycare pick-ups. Now, as a primary investigator with a lab of her own, Dr. Monje works to ensure her team also can find a balance between parenthood and work.

“I routinely traveled with my nursing baby and my mother as a caregiver, while my husband was home with the other kids, when I attended conferences or scientific meetings. Once I was giving a talk with an infant sleeping in the baby carrier strapped to my torso,” said Dr. Monje. “Young scientists and doctors who are new parents are busy enough without needing to figure out the basic logistics necessary to get through each day.”