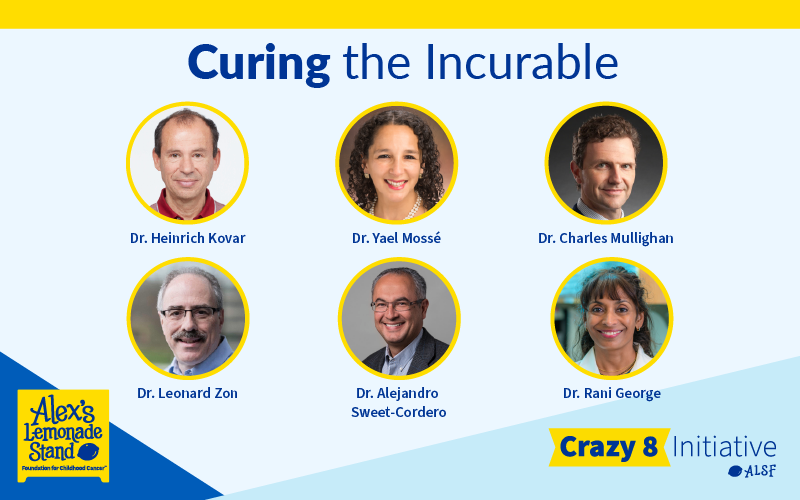 The treatment for osteosarcoma, one of the most common types of pediatric sarcoma of the bone, has remained unchanged for 40 years.

And while conventional methods (chemotherapy, surgery and more chemotherapy) work for some children with osteosarcoma, the disease spreads from the primary site in the bone to the lungs. Once this happens, there is no standard of care and survival rates dip from 60% to 30%.

Families are left with limited options and experimental clinical trials.

The problem is the same with other types of childhood cancer — from neuroblastoma to Ewing sarcoma to high-grade gliomas. Progress has been made towards safer treatments, but children are still urgently waiting for cures.

Cures for these children will only be found with research — and Alex’s Lemonade Stand Foundation (ALSF) Crazy 8 Initiative researchers are working together to make a difference for kids with osteosarcoma and other hard-to-treat childhood cancers.

“The prospect is really bright. If we can look into the mechanisms underlying metastatic spread, we will be able to identify ways to treat children,” said Rani George, MD/PhD from Dana Farber Cancer Institute.

Dr. George is leading one of the two teams who are studying osteosarcoma with funding from the Crazy 8 Initiative. Principal Investigator Alejandro Sweet-Cordero, MD, of the University of California San Francisco, is leading the other team. Both Dr. George and Dr. Sweet-Cordero’s team received $3 million in the second round of Crazy 8 funding.

Each project team uses rigorous and innovative approaches that directly address the most uncurable childhood cancers.

Her team, hailing from five different institutions, will use innovative technology to rewire specific cancer gene connections making them more susceptible to targeted treatments, with the hope of ultimately leading to cancer cell death and a cure.

The team led by Dr. Sweet-Cordero aims to understand the makeup of each cell within an osteosarcoma tumor. Osteosarcoma is extremely heterogenous — meaning that within a tumor no two cells are alike. This makes treatment difficult; because some cells may respond to therapy and others may not.

By using new technology developed by team member Dr. Ana Obenauf, the team will identify and isolate osteosarcoma cells with increased resistance to therapy or increased ability to form metastasis, enabling early intervention that will change the fight against osteosarcoma. His team includes researchers from four different institutions with specialties in molecular pathology and oncology.

“The Crazy 8 grants brought people together, motivating all of us to be part of a bigger effort,” said Dr. Sweet-Cordero.

Donate to The Crazy 8 Initiative