Did you know that Houston is a hub for childhood cancer research? With world-class researchers at MD Anderson Cancer Center, Texas Children’s Hospital and Baylor College of Medicine, Alex's Lemonade Stand Foundation (ALSF)-funded research is helping kids fight cancer in Houston and beyond!

At the end of March, ALSF will host the second annual Lemon Climb Houston, an inspirational stair climb where participants are challenged to walk, run or race up 35 or 75 flights of stairs to the top of the tallest building in Texas, the 600 Travis building and fundraise to help kids fight cancer.

Baylor College of Medicine receives funding through the ALSF Center of Excellence program. This grant program provides multi-year funding that supports the infrastructure critical to developing, administering and completing clinical trials. One of the investigators at Baylor, Dr. Jennifer Foster, is leading a clinical trial for children with relapsed solid tumors. This trial combines traditional chemotherapy with an enzyme inhibitor—that is designed to stop tumor cells from replicating. The trial helped 13-year-old Eden Green, a Houstonian who was diagnosed with a tumor that had never been seen before.

Here are three Houston childhood cancer heroes leading the climb to cures and inspiring us to follow them all the way to the top! 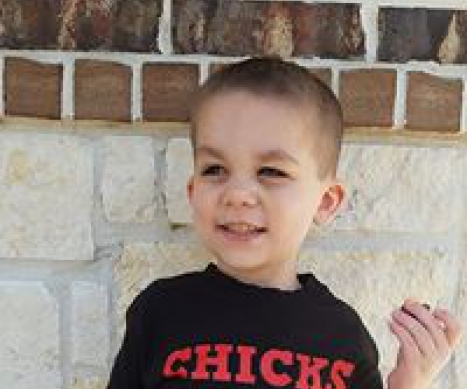 Owen’s parents, Sarah and Brandon Langston, were shocked when doctors discovered a brain tumor. Owen was a happy, outgoing 2-year-old. It seemed impossible that he had a brain tumor.

The tumor was medulloblastoma, the most common type of central nervous system embryonal tumor in childhood. It is typically found in the cerebellum of the brain, where it blocks the flow of spinal fluid resulting in headaches, nausea and abnormal balance.

Initially, Owen had brain surgery to remove the tumor, followed by six months of chemotherapy. Then his cancer returned leading to two more surgeries, four cycles of high-dose chemotherapy and 30 days of proton radiation. Owen finished treatment in February 2018 and continues to have routine MRIs to ensure the cancer is gone for good.

Owen is an outgoing jokester—who loves to chat with anyone he meets. His family attended the inaugural Lemon Climb last year in Houston and will be  back again this year.

“Childhood cancer (research) wasn’t even on my radar until Owen’s diagnosis, so I appreciate that now and I’m going to dedicate the rest of my life to advocating for it,” said Sarah, Owen’s mom. 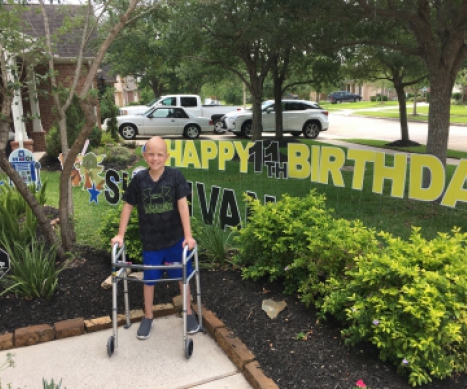 When Sullivan was 10 years old, he began having back pain. It continued to worsen and an emergency room doctor gave Sullivan’s parents, Dan and Jen Butler, the diagnosis: medulloblastoma, a tumor in Sullivan’s brain and spine.

Sullivan, who loved playing with his brothers, his legos and participating in triathlons or the talented and gifted program at his school, now was fighting for his life.

Sullivan had surgery, proton radiation and chemotherapy at MD Anderson and Texas Children’s. Surgery left Sullivan with posterior fossa syndrome, which impaired his balance, coordination and ability to walk. Now, two years after his diagnosis, Sullivan continues the long process of rehabilitation and adapting to his new life as a cancer survivor. He can walk again and he attends school full time, with some accommodations to help him with deal with the challenges resulting from the brain tumor and treatment.

He is a sweet kid with an impressive inner strength and drive. His parents continue to share Sullivan’s story to raise awareness and funds for critical research.

“With access to the right funds and having people support organizations like ALSF, 20 years from now, it will be a different ballgame.” said Dan Butler, Sullivan’s dad.

The Butler family will join other Houston area families for the second year at the Lemon Climb. 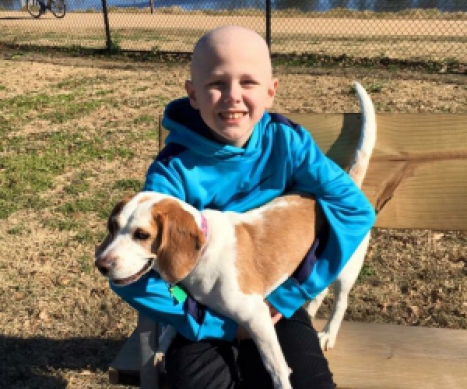 Julie still remembers when her son, Taft, came home after a family vacation with what they thought was only an ear infection. A visit to the doctor soon became the first of many for 12-year-old Taft. The ear infection lingered and Taft also complained of stomach pain and fatigue during soccer games.

Then blood work revealed the real diagnosis: pre-B cell acute lymphoblastic leukemia (ALL). Taft began treatment immediately. He missed an entire school year, took more than 5,000 pills and endured 68 chemotherapy treatments. His mother, Julie, said the thing that actually bothers Taft is not the treatment or missing school —but when people treat his bravery with too much praise.

“One time I told him that he was my hero and he just went, ‘Oh god mom, please stop,’” said Julie.

Taft finished treatment in October 2018 and continues to get regular check-ups to ensure he remains cancer-free. His family is committed to helping other families fighting the same fight they did.

“Since Taft’s diagnosis, we’re trying to raise as much awareness as we can for childhood cancer, which is where ALSF comes in,” said Julie. The family is part of Team Cypress Strong and will climb the stairs for the second time during the Lemon Climb Houston. They hope to reach even greater heights to help kids like Taft, who is happily back in school with his friends.

If you are in the Houston area, join ALSF for the second annual Lemon Climb Houston on March 30, 2019 and support the fight against childhood cancer!