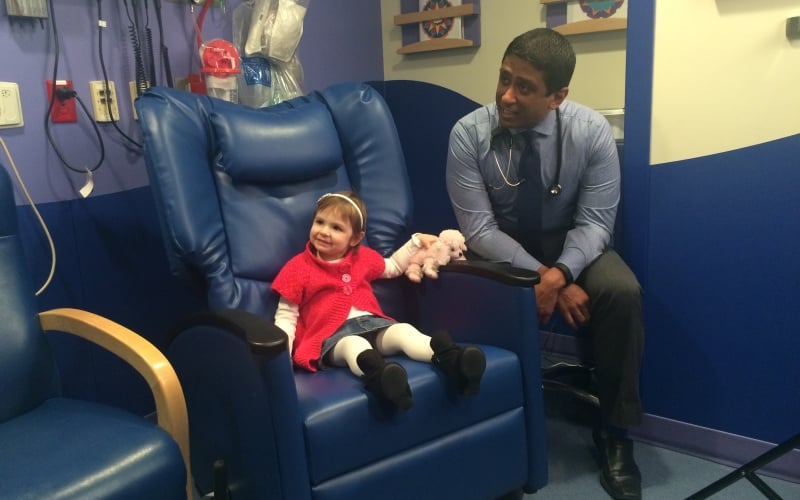 Malina was just a toddler when she was diagnosed with Ewing sarcoma. Pictured above, Malina with her oncologist, Dr. Glenson Samuel. While in treatment, Malina participated in a research study that required her to donate blood at each check-up.

Malina was a typical toddler—playing, walking and exploring—but then she gradually stopped walking. After repeated doctor and ER visits, tests revealed the source of Malina’s immobility:

Malina had a tumor in her spine, pressing down on vital nerves causing her to be unable to walk. Malina endured surgery to remove the tumor as well as chemotherapy and radiation.

While in treatment, Malina participated in a research study that required her to donate blood at each check-up. Her doctor and ALSF funded-researcher Dr. Glenson Samuel, used her blood sample to study methods for early detection of Ewing sarcoma relapse.

The disease Malina battled is one of several types of pediatric sarcomas. Here are four things you need to know about pediatric sarcoma and how you can get involved with finding safer treatments and cures:

1. Pediatric sarcomas are a diverse type of childhood cancer.
Sarcomas typically arise in the bones and soft tissues of the body. Ewing sarcoma, rhabdomyosarcoma and osteosarcoma are three of the most common types of pediatric sarcoma.

2. While all sarcomas share some similarities, there are two distinct categories: fusion-positive and fusion-negative.
Fusion-positive sarcomas like Ewing sarcoma are characterized by chromosomal abnormalities that lead to the fusion of two disparate genes. Fusion-negative sarcomas, which include osteosarcoma and embryonal rhabdomyosarcoma, are characterized by a greater degree of genomic complexity, having too few or too many copies of genes.

3.  The importance of research cannot be underestimated.
“There is a tremendous unmet need. We need more studies in laboratories to help us understand how to target the disease and clinical research to make sure treatment works in people,” said Dr. Richard Gorlick, Division Head and Chair of Pediatrics at M.D. Anderson Cancer Center in Houston and member of an ALSF-funded research team studying fusion-negative sarcomas.

4. Researchers are working to understand the difference between pediatric sarcomas.
Through the Crazy 8 Initiative, launched by Alex’s Lemonade Stand Foundation (ALSF) last September, researchers are digging into the differences between pediatric sarcomas, sequencing diverse tumor samples and the large-scale testing of drugs against the genetic fusions that make certain sarcomas develop. You can learn more about the Crazy 8 research projects here.

Get Involved and Help Fund Pediatric Sarcoma Research!
Turn awareness into action, by joining The Million Mile, the largest childhood cancer awareness challenge that funds researchers so they can find better treatments and more cures for kids battling cancer. Whether you are a casual walker, an avid cyclist or a triathlete, YOU can make a difference in the lives of children fighting cancer. To show support for and bring awareness to Childhood Cancer Month, participants of all ages log as many active miles as possible all month long while raising money to help kids with cancer. Our goal is to collectively move 1 million miles during the month of September.