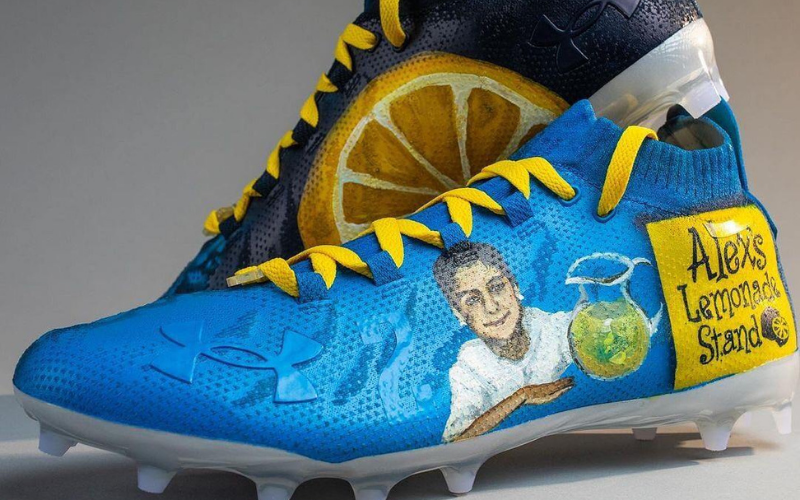 They may be rivals on the football field, but one thing unites Jalen Hurts of the Philadelphia Eagles, Aaron Jones of the Green Bay Packers and Sony Michel of the New England Patriots: the sweet cleats they each donned for kids with cancer at their December 6, 2020 NFL games. The cleats were specially designed and featured Alex’s Lemonade Stand Foundation (ALSF).

The promotion was part of the #MyCauseMyCleats campaign. The campaign gives NFL players a chance to select a charity near and dear to their hearts. Then the players represent the charity by wearing the special cleats on the field. The ALSF cleats put childhood cancer in the national spotlight, raising awareness of the need for more research, safer treatments and cures.

Meet the players and check out the cleats:

“This year has given us a lot of lemons, but Alex's Lemonade Stand Foundation has continued to make lemonade. For #MyCauseMyCleats, I am proud to support their mission to change the lives of children with cancer through funding impactful research, raising awareness, supporting families, and empowering everyone to help cure childhood cancer,” said Jalen in an Instagram post.

2.    Aaron Jones, RB, Green Bay Packers
Aaron teamed up with ALSF partner Northwestern Mutual for a special contest to design his cleats with the help of ALSF childhood cancer heroes. Aaron and Northwestern Mutual were proud to select the winning design by childhood cancer hero Ethan Haley, who was battling a brain tumor called ependymoma. Aaron surprised Ethan on a Zoom before the December 6 game. Tragically, Ethan passed away on December 20, 2020.

3.    Sony Michel, RB, New England Patriots
Sony’s specially designed cleats featured ALSF and childhood cancer hero Sophia Hurtado. Sony had the chance to meet Sophia while at an event at American Heritage School, the school they both attended, just weeks before she passed. He was immediately inspired by her fierce spirit, and the two became friends.

To honor Sophia during the NFL’s #MyCauseMyCleats campaign, Sony wore cleats featuring Sophia and ALSF. His cleats are also available to bid on through the NFL Auction with proceeds benefiting ALSF.

Childhood cancer is a devastating reality. No child deserves to battle and suffer at the hands of this disease. This years #mycausemycleats honors a warrior,
Sophia Hurtado (10/25/02 - 10/30/20) an ambassador for @alexslemonade @AH__Athletics pic.twitter.com/bKUpYmWSd2

END_OF_DOCUMENT_TOKEN_TO_BE_REPLACED

Nora may be a shy little girl, but she is fierce! Nora was diagnosed with stage IV high-risk neuroblastoma at 4 years old and traveled a long, difficult road in treatment. After more than a year of fighting, Nora relapsed, but she refuses to slow down!
Read more »