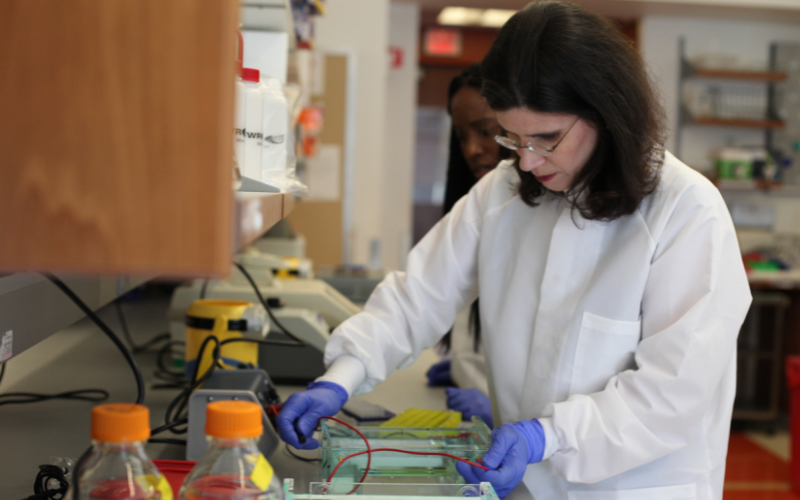 The National Institutes of Health define rare diseases as conditions that affect fewer than 200,000 people. But for families facing one of these diseases, like Beckwith-Wiedemann Syndrome (BWS), these diagnoses don’t feel rare. BWS affects approximately 1 in 10,000 kids and is linked to increased risk of certain childhood cancers, including Wilms tumor and hepatoblastoma. With proper treatment and monitoring, these cancers are treatable, which makes it critical to properly identify kids with BWS. Jennifer Kalish, MD, PhD, a pediatric geneticist at Children’s Hospital of Philadelphia, has focused her career on studying rare diseases like BWS.

An Alex’s Lemonade Stand Foundation-funded researcher, Dr. Kalish specializes in rare diseases with cancer predisposition in children, like BWS and WAGR Syndrome. BWS is a genetic disorder typically associated with symptoms such as enlarged tongue, overgrowth on one side of the body or low levels of sugar in the bloodstream. Children with WAGR typically have four key clinical issues: Wilms tumor, Aniridia (lacking an iris), Genitourinary anomalies (issues with the urinary or genital tract) and a range of developmental delays. WAGR occurs in 1 in every 500,000 to one million kids.

Dr. Kalish’s work has helped make significant progress for growing understanding of BWS and its relation to tumor development. A two-time ALSF-funded researcher, first with a Young Investigator Grant in 2013, then an Epidemiology Grant in 2019, her latest grant culminated in a 2021 publication in the journal Genes.

During that research work, Dr. Kalish’s lab identified other features associated with milder cases of BWS that may not present with the traditional symptoms. Due to the influx of new BWS data like Dr. Kalish’s, researchers now refer to the disease as Beckwith-Wiedemann Spectrum to indicate the myriad symptoms present in kids ranging beyond the symptoms historically associated with syndrome.

“Some children in the BWS spectrum do not look like the textbook cases we’ve been accustomed to seeing for decades,” said Dr. Kalish. “We wanted to see if we could more accurately predict which patients might develop tumors based on clinical characteristics.”

Using data from their BWS registry, Dr. Kalish’s team investigated how newly identified characteristics associated with BWS correlated to tumor risk. They discovered that these other factors, ranging from enlarged kidneys to the prenatal history of a child, were also linked to tumor growth. These findings suggest that the risk of tumors in kids on the BWS spectrum is higher than the previously understood rate of 8-10%.

“Ultimately, our findings went beyond our previous understanding of tumor risk in patients with Beckwith-Wiedemann syndrome,” Kalish said. “While more work is needed on this incredibly complex and heterogeneous disease, we have substantially increased the tools at our disposal for earlier and more accurate diagnosis, allowing us to capture patients who may have previously been missed.”

Like BWS, WAGR Syndrome is associated with tumor predisposition, but it presents a different problem for researchers. At 50 to 100 times rarer than BWS, the scant number of cases make it difficult to find a representative sample size to study. Utilizing 91 children from the international WAGR registry, Dr. Kalish’s group undertook the first comprehensive look at WAGR syndrome in more than 15 years. The full report was published in the journal Frontiers in Pediatrics.

Their investigation revealed more symptoms present in kids with WAGR, including kidney issues, congenital heart defects, short stature, hypertension, and others. However, even within the commonly associated symptoms of WAGR, Dr. Kalish’s team noticed further variation, such as drastically different eye issues. Like BWS, this rare disease constitutes a spectrum more than a syndrome, meaning there are now more ways for doctors to identify kids with disease and monitor for signs of tumor growth.

“By providing this more comprehensive picture of WAGR syndrome, we’re hopeful that these patients can receive the correct diagnosis as early as possible and establish a medical home so that parents and physicians can advocate for them,” Dr. Kalish said. “Each child must have their own individualized care plan, and we hope that these recent findings help physicians develop those plans.”

Thanks to work from Dr. Kalish, more kids than ever will hopefully be diagnosed and provided the proper plan to monitor and treat any tumor growth. While it may seem counterintuitive to look towards rare diseases as a means of understanding a disease that affects so many, Dr. Kalish believes it’s a perfect entry point to understand more than just cancer:

“Just like we can study cancer through the lens of rare disease, there's a lot of other developmental and fundamental developmental processes in terms of organ development, how muscles develop, lots of things that are very basic that we can learn from rare disease.”